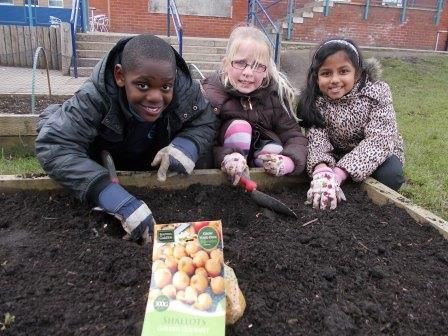 St Catherine’s Catholic Primary School in Sheffield was awarded a YGT Grounds Development Award in Spring 2012 and helped them to create a new growing area in their grounds. Their latest update and photos show how they have been fairing in the school garden with the late Spring this year:

March, crazy weather, we’ve had quite a few indoor lessons due to the weather this month! However we still managed to get a couple of important jobs done. We are excited to see the apple tree coming to bud this year. We’ve had to temporarily plant it at the top of our woodland area as we are still preparing our new orchard but hope to get it planted before the end of term if possible.

We received free potato kits from GYOP in January and the children were taught how to chit and then the Y4 children planted them up and will keep looking after them until they are ready to harvest in June/July.

In our raised beds area the children planted up shallots, we then had to cover the beds with rainbow canes and bird netting as we have a couple of foxes on our school grounds which like to dig up the soil.

It’s unfortunate that we had such bad weather this month as it held us back from planting up seeds although we have managed to start up some sweet peas.'