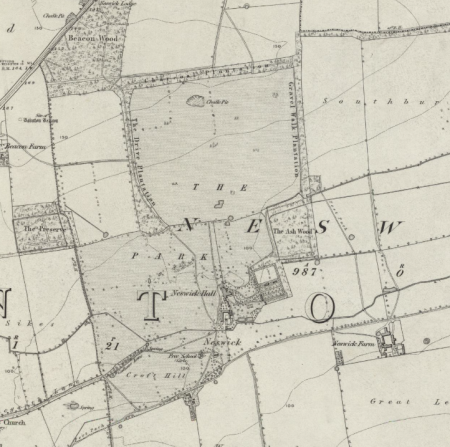 The former parkland of Neswick Hall with its boundary plantations provides a good example of the typical layout of a modest mid-18th century designed landscape.  Of particular interest is the restored walled kitchen garden.

The Neswick estate was held by the Salvin family of Kilham and Nafferton for two hundred years until it was sold to Thomas Anlaby of Etton in 1613. It descended in the Anlaby family until the death c. 1710 of Matthew Anlaby of Lebberston (North Riding) when the estate was divided between his five daughters.  In 1714 Thomas Eyres, a Hull surgeon, husband of one of the heiresses, purchased the other four shares and became sole owner of Neswick (Neave & Needham, ‘Neswick Hall’, 12).

Esther, one of Eyres’ two daughters and eventual heiresses, married Robert Grimston, attorney, of Bridlington. Esther Grimston inherited half the Neswick estate by 1743, then three years later Robert Grimston purchased the other half. On the death of Robert’s grandson John Grimston in 1846 the estate passed in turn to the younger sons of his elder sister Lucy, wife of Sir Robert Wilmot, Bt. When the fourth son John Wilmot (1807-79) succeeded to the estate in 1860 he took the name of Grimston.  His son John Grimston died in 1895 and Neswick passed to his sister Fanny, widow of Walter F. Wrangham (1828-1893), who lived at Neswick Hall until her death in 1929.

Mrs Grimston was succeeded by her son Major Digby Francis Wrangham (1869-1945) who died at Neswick Hall at the end of 1945.  His son John Digby Wrangham died 1953 when most of the estate was sold and Neswick Hall was demolished in 1954. The hall site and some of the surrounding land was owned by the Wrangham family until 1988 (Neave & Waterson, Lost Houses, 48).

Before the early 18th century the site of Neswick Hall lay in the centre of a small village surrounded by open arable fields. The village had 110 taxpayers in 1377 and there were 25 households in 1672. Of the 25 houses, 22 had only one hearth, two had two hearths and one had three hearths. The last may have been the manor house mentioned in 1713. (Neave, ‘Rural Settlement Contraction’, 299)

Recent air photographs of the parkland show two areas, to the north and south of the hall site, comprising earthworks of the houses and garths of the village, surrounded by the ridge and furrow of the open field strips.

The first phase of the creation of the parkland took place in the early 18th century during the ownership of Thomas Eyres 1714-c. 1740. It was he who enclosed the open arable fields and cleared away some three-quarters of the village. (Neave ‘Rural Settlement Contraction’, 300) He evidently built a large house, the core of the later Neswick Hall, and to improve its setting the number of village houses was reduced to seven.

There is no evidence, documentary or physical, to indicate the extent or nature of the grounds he created at this time. No parkland was shown on Jefferys plan of 1775.

Robert Grimston (1747-90) who inherited the estate in 1756 was evidently responsible for creating the parkland which still survives in part. Grimston, who had spent three years on an extended Grand Tour, began work on the hall, involving substantial additions, just before his marriage in June 1770.

Soon afterwards he turned his attention to the grounds and a map dated 1779 shows the first stages in the creation of the parkland to the north of the house. (HHC, U DDCV/116/1)  Brick Kiln Close and Rye Grass Close had been taken into the grounds with a plantation (later called Gravel Walk Plantation) placed on the east side and another on the north side (later Charcoal Plantation). The west side was still open when the map was drawn but there is an annotation ‘Planted about 3.0.0’ – this was later known as Drive Plantation.

The 1779 plan also shows the walled kitchen garden in its present position  to the east of the hall site. It is shown, as now, divided into two; the northern section is marked as ‘Garden’, the southern section as ‘Nursery Garden’.

Evidently no further changes were made before the demolition of the house in 1954, following which much of the northern parkland was returned to agriculture.

The parkland of the demolished Neswick Hall lies 4 miles south-west of Driffield and ¾ mile east of Bainton to the south of the A614 road and north of Neswick Lane.

The parkland is bounded by plantations on its north and much of its east and west side. Neswick Lane, a minor road running east from Bainton, forms the southern boundary.

On the east facing dip slope of the Yorkshire Wolds, the land rising south to north  from around 25 m. to around 45 m. (OD).  The bedrock is chalk  (Flamborough Chalk Formation) and the superficial deposits boulder clay(Devensian Till) with a strip between the road and kitchen garden of sand and gravel.

The hall site and parkland are surrounded by farmland with woodland to the west and north-west..  The parkland lies on the boundary between the East Riding Landscape Character Area 13 High Rolling Farmland and Area 16 Sloping Farmland.

The former stables, walled gardens and parkland are now reached by a drive from Neswick Lane.  In the late 18th century a drive was constructed to the hall from the main Driffield Road (A614) to the north. Here a picturesque lodge with circular and Gothick windows was built in the early 19th century. The lodge was demolished c. 1965.

Nothing remains of the hall. Two large blocks of stone, one with a boot scaper, are all that could be seen on the site of the hall in 1985.

The late 18th-century and early-mid 19th century stable outbuildings to the south of the hall site, now a private house, are listed Grade II as is the nearby mid 19th-century Dutch barn.

There are few indications of the former pleasure gardens near the house except a few yew trees and other evergreens. The western boundary of the gardens was still marked by a cast iron fence in 1985.

The 18th-century walled kitchen garden remains as does the former gardener’s cottage, now much enlarged.  The derelict gardens were restored from 1989 onwards. The walled garden is divided into two as it was in the 18th century. The lower part is worked as a vegetable and flower garden with glasshouses against the north wall. In 1879 the gardens contained vineries and a peach house. The upper part of the garden now has a tennis court, a large lawn  and a small orchard. It measures 2.7 acres (1.1 ha).

In 2013 the area of parkland is much reduced. The boundary plantations remain but much of the land is now arable.

Note of trees planted 1779 by Robert Grimston on his estates at Neswick and Bainton, East Riding Archives and Local Studies (ERALS), DDGR/38/132