One of Yorkshire’s earliest garden catalogues was made by Sir John Reresby of Thrybergh Hall near Rotherham on the very precise date of Friday 11 April 1642. We are lucky that the catalogue survives and that it has been transcribed, see ‘The Exactness and Nicety of Those Things: Sir John Reresby's Garden Notebook and Garden (1633-44) at Thrybergh, Yorkshire’, by Jan Woudstra and Sally O'Halloran in Garden History 36 (1) 2008, pp. 135-193. The article can be read online: http://www.jstor.org/stable/25472398.

There are many puzzles associated with the list of plants in Reresby’s garden, not least of which is his reason for making it. Sir John was part of a circle of Yorkshire gardeners, which included the Reverend Master Walter Stonehouse of Darfield and the Lord Lieutenant of Yorkshire, Thomas Wentworth (or, at least, his gardener). The circle exchanged plants and ideas about gardening. Sally O’Halloran notes that his neighbour, Stonehouse, had begun a similar list of his own garden in 1640, possibly in the ‘hope of founding a new colony’ (ibid, 154) presumably if things got too bad at home. His list can be found in an article by RT Gunter in the Gardeners’ Chronicle, Volume 67 (3rd series), 1920, pp. 240-1, 256, 268-9 and 296 (copy is at https://www.biodiversitylibrary.org/item/83848#page/7/mode/1up), together with plans of his gardens (see below). 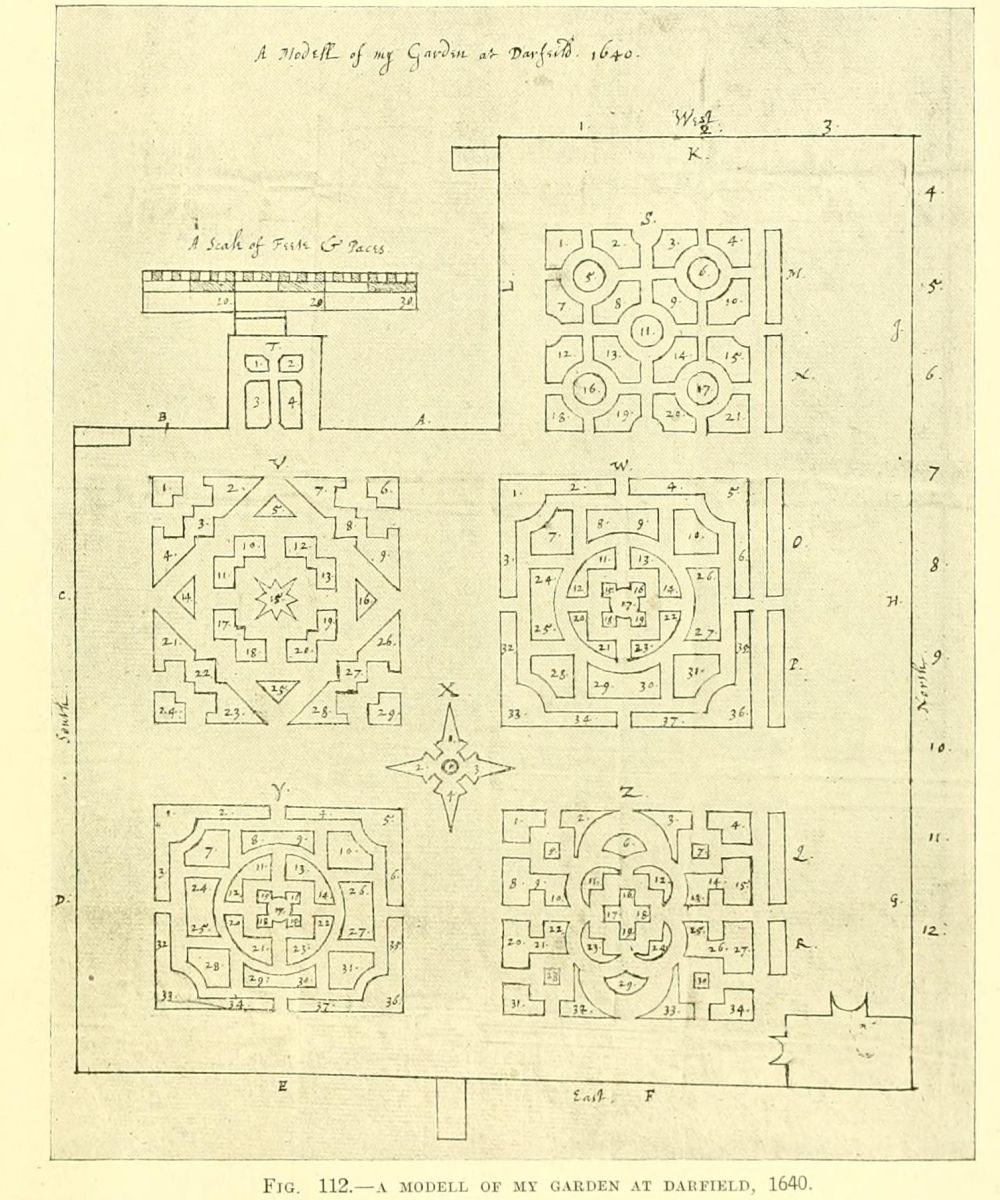 The ravages (actual and rumoured) of the Civil War offer a further explanation. In August 1642, 4 months after Reresby began his list, an eyewitness reported an ‘outrage’ committed by soldiers for the King and Parliament upon a garden and house in Acton (Essex):

some six miles distant from London, where lived a gentleman, reported and believed to be different in religion (as too many now-a-dayes are, which we know to be the cause of all our evils) from the Church of England; but, in the voice of most of his neighbours, a sober, moderate, and charitable-minded man. This gentleman, having in his house no more but one ancient gentlewoman, his kinswoman, whom he intrusted as his housekeeper, with one serving man and maide, had his house besett with divers companies of soldiers, who had listed themselves for the service of the King and Parliament, and were in pay and command under officers; where, after they had forced him to open the gates by threatning words, they entered the house, and so strangely despoiled him that they left him not a bed, bedstead, table, doore, or glasse window, chest, trunk, or the smallest utensil…He hath, with much industry and long time, rarely furnished a plot of ground with the choicest flowers and outlandish trees which he could procure, which they plucked up by the roots, as many as they could, and the rest left so desolate that, whereas it was thought the finest and most curious gardens in all those parts, there is now left nothing but the ruines of Art and Nature.

Rumours of the ravages of the rival armies were circulated effectively through pamphlets and tracts (there is an excellent collection in York Minster Library) and through the extensive correspondence and visiting kept up by gentleman and their families.

Perhaps it was neither of these anticipated or feared cataclysms. We should not underestimate the popularity of list-making and the keeping of notes of all kinds in what are often called commonplace books. There are hundreds of examples of these in archives all over the UK. The Book of Remarks of William Storr of Cawood is one local example (Borthwick Institute for Archives, MD/153). Sometimes in these books it is hard to discern any particular reason for a note having been made. Idle curiosity certainly seems to have played a part in Storr’s book, which contains ‘miscellaneous notes on weather, natural phenomena, famous men, foreign lands etc., early 18th century’ as well as more obviously useful lists of local landowners and Storr’s acreage under timber, for example.

In Reresby’s case one might also wonder why he bothered to write a list at all, when he could have followed common practice in the 16th and 17th centuries and made notes directly in his copy of Parkinson’s book. We know that when making his list he had a copy of John Parkinson’s Paradisi in Sole Paradisus Terrestris (https://archive.org/details/b30328056) close at hand since, as Sally shows he consistently (but not invariably) noted the page number in Parkinson and used the Latin name given by Parkinson. We do not know, however, whether Reresby owned a copy of Parkinson, or had a copy on loan. There is sparse information about provenance for any surviving copies of Paradisi in international libraries contributing to the various online book catalogues and none that I have found shows evidence of having been owned by Sir John. On the other hand, we know that Reresby exchanged plants and information with friends and neighbours, so he might have borrowed a copy – or his own copy might have disappeared when his estates were sequestrated in 1644.

Further puzzles remain. How, exactly, did Reresby make his list? Did he work directly from Parkinson, on a cold wet day in April when he had no chance of getting out of the house? Did he go round the garden, then resort to Parkinson? Close examination of Reresby’s notebook might suggest answers to these questions. And probably, if my experience of using archives is anything to go by, further examination might well raise yet more questions.

He first lists trees planted in ‘my Orchards & Gardens at Thrybergh: Begunne 1633’, starting first with stone fruits (apricots, plums, peaches and nectarines). Then he lists his apples, pears and cherries followed by other trees and shrubs including a lemon and orange, although how successful he was with these is unknown! Next are fruit trees planted in 1638, 1639 and 1640 and then he turns his attention to his 27 tulip cultivars, which at the time were prized possessions.

After he lists his flowering plants of bulbs, perennials, biennials and annuals that numbered over 300 species and cultivars, he made an alphabetical list of all his plants including their Latin names referenced against Parkinson’s book. The rest of the book appears to be completed later with him noting what plants he got in 1643 and 1644, followed by notes unrelated to the garden.

It would be interesting to know whether all, or any, of Sir John’s plants are still grown in Yorkshire. Do we still have the Childing Dasie (striped double Bellis perennis) or Jack an Apes on Horsback (Primula elatior or Oxlip)? What about the White Pipe Tree (Syringa vulgaris or single flowered white lilac tree) or Barbary Buttons (Medicago scutellata)? Perhaps you know…if so please get in touch.