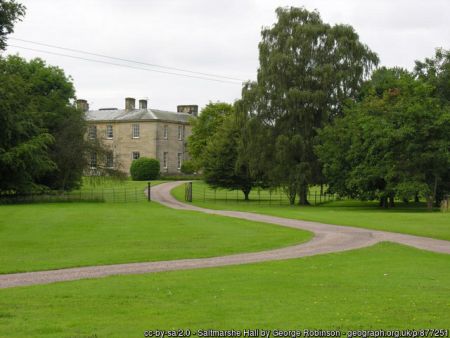 A good example of a park with perimeter plantations gradually laid out from the early 19th century onwards to provide a setting for a new house, Saltmarshe Hall, built 1825-8 on a site overlooking the River Ouse.

The Saltmarshe family of Saltmarshe claimed descent from Sir Lionel, said to have been knighted by William the Conqueror in 1067. In the later Middle Ages they built up a considerable estate, but in the late 16th and early 17th centuries much land was sold. The estate was built up again in the 18th century. Philip Saltmarshe died in 1791 and the estate passed to his son, also Philip (1780-1846) who built a new house, the present Saltmarshe Hall, in 1825-8. He died in 1846. (Ward, East Yorkshire Landed Estates, 33-4)

The last member of the family, another Philip, died in 1970, and the Saltmarshe estate was sold. In 1974 Philip and Sally Bean purchased the hall and about 17 acres, which they sold to Rowland and Kate Whyte in 2012.

The owner chiefly responsible for the landscaping was Philip Saltmarshe who died in 1846.

The Saltmarshe family apparently had a hall close to the site of the present one in the Middle Ages. This had been abandoned by about 1700, and the family had moved to property closer to the village. A plan of 1791 shows closes near the site of the medieval house called Orchard Close, The Garths, Little Hall Close and Great Hall Close, but there was no park. (Saltmarshe, History of Saltmarshe, 33)

The park was created by Philip Saltmarshe from about 1805 onwards, and enlarged by his father in the second half of the 19th century.

Philip Saltmarshe probably made his decision to build a new house, in a parkland setting, around 1805, when he was in his mid 20s.  The site chosen for the house was close to where the Saltmarshes’ old medieval manor house had stood. Although there was no existing park, there were some old trees, possibly in Little or Great Hall Close. In a letter dated January 1839 a neighbour, Arthur Empson, wrote that he had ridden over to Saltmarshe following a storm and found ‘50 fine trees in the Squire’s Park’ had been lost. The ‘squire’, Philip Saltmarshe, was ‘quite subdued by it’ having built his house there ‘because of the old trees’. (Inf. from Sally Bean)

A couple of rough sketch plans, one on paper watermarked 1805, show Saltmarshe’s proposed layout of the park and plantations. (Plans in private collection)  In 1806 he began work on the plantations, although the house was not built until 1825-8. The first new trees planted were a group in Hall Close, together with a plantation of about an acre at the north end of the close, in 1806-7. He continued planting each year, building up the perimeter plantations and clumps of trees shown on the mid 19th-century OS map. There are references to oaks, blackthorn and hawthorn. Some of the single trees planted in 1812-13 were oriental planes, which died. (ERALS, DDSA/872 (f); DDSA/1220; Saltmarshe, History of Saltmarshe, 42) The only areas not planted were the Newdike enclosure, the two Fox Lane closes, and the village crofts between the end of the garden walk and Fox Lane. In the rest of what was to become the park Saltmarshe gradually removed all the fences and laid down the arable to grass. It has been estimated that he spent some £3000 on trees and plantations. (Saltmarshe, History of Saltmarshe, 42; 186)

As part of these improvements Saltmarshe obtained permission to build a new road through the park, located east of the existing one, which was too close to the site of his proposed new house. Accounts show the new road was built 1819-20, and the old one removed in 1823. (ERALS, DDSA/1055)  The house was built 1825-8 (see below).

Saltmarshe was mapped incidentally when the Ordnance Survey compiled maps for the area of Lincolnshire on the opposite bank of the River Ouse in the 1820s, some thirty years before the more detailed First Edition OS maps for the East Riding were published. The 1824 OS map covering Saltmarshe is useful in that it confirms that the perimiter plantations had been established and road moved by this date, before work began on the house.

The park was extended later in the 19th century by Philip’s son, also Philip (d. 1912) by throwing into it the Newdike Closes which he laid down to grass as well as the two Fox Lane Closes and the village crofts, apart from the one adjoining the Laxton lane. (Saltmarshe, History of Saltmarshe, 42)

In 1868 the ‘spacious park’ and grounds of the hall were flooded, the water recorded as 3 ft deep, after the River Ouse burst its banks. (Leeds Mercury, 11 Feb 1868)

The grounds of Saltmarshe Hall now amount to about 17 acres, which includes about 7 acres of the old park. A lime avenue in the gardens was planted in the late 20th century to replace elms lost to Dutch Elm disease. (Inf. from Sally Bean)

Much of the former parkland, now in separate ownership, has been ploughed up, although some trees have been retained and all the former park, except the easternmost fields along Fox Lane comprising 40 acres (16 ha) is marked as parkland on a current Ordnance Survey map (see below p. 10). The short avenue of chestnuts on the road through the park is a recent addition to the landscape. The perimeter plantations survive.

Saltmarshe Hall lies west of the village of Saltmarshe, on the north bank of the River Ouse, 4 miles south-east of Howden and 20 miles west of Hull.

The present area of the gardens, border plantations and what is shown as parkland on a current Ordnance Survey map (below p. 10) is about 124 acres (50 ha). In the 19th and early 20th century it extended further eastwards to Fox Lane and then covered 164 acres (66.5 ha).

The boundaries of the parkland created in the early 19th century are Foxlane and Close plantations to the north, and Tinkhill and Stickhill plantations and the Saltmarshe drain to the west. The River Ouse forms most of the southern boundary, with Fox Lane marking most of the eastern boundary.

A flat low lying area below 5 m AOD, right on the edge of the River Ouse. The bedrock is mudstones and siltstones (Mercia Mudstone) and the superficial deposits are alluvium.

The hall is reached via a drive leading off the road running through the parkland from Main Street, Saltmarshe to the south-east to Moorfields Lane to the north-west. There is no entrance lodge.

Designed by Pritchett & Watson, the hall was built 1825-8, twenty years after Philip Saltmarshe began to lay out the surrounding parkland. Two storeys, five bays, in a simple Neoclassical style, with fine ashlar masonry. The house was extended in 1859. (Pevsner & Neave, Yorkshire: York & ER, 594)

The stables lie to the west of the house, and were not built until 1842. Two storeys, of grey brick. Attached to the rear is a U-shaped icehouse which is entered from the first floor of the stable block. (Pevsner & Neave, Yorkshire: York & ER, 594)

In 1856 Saltmarshe Hall was described as standing in ‘a well-wooded lawn and neat pleasure grounds’. (Sheahan & Whellan, History of York & ER II, 609.) Three years later Philip Saltmarshe and his gardener, Mr Gibson, were among the principal exhibitors in the ‘gentlemen’s and gardeners’ class at the Howden Floral and Horticultural Society show. (Leeds Mercury, 20 August 1859).

The small pond between the kitchen gardens and stable block is presumably the fish pond that was being made in 1818, perhaps before the location of the stables, which were not built until 1842, had been determined. (ERALS, DDSA/1055).

When the estate was put up for sale in 1971 the hall was said to have ‘wide sweeping lawns surround[ing] it on three sides, dominated by a fine cedar, and bordered by shrubberies, wooded belts and walks alongside the river’. (Sale catalogue, 1971)

The present gardens were created in the last quarter of the 20th century after Sally and Philip Bean purchased Saltmarshe Hall.

The kitchen garden enclosure was apparently built in 1817 when the ‘garden account’ included payments for lime, sand, women dressing bricks and work by a stone mason together with a payment for surveying the ‘new garden’. The same year peat for the garden was brought by river.   (ERALS, DDSA/1055)

In 1842 Robert Denison, who was related to the Saltmarshes, provided a plan for a fig and mushroom house. (Plan in private collection) Some of the greenhouses and vineries shown on the 1890 OS plan survived in a derelict state until the 1970s.  When the Saltmarshe estate was put up for sale in 1971 the one-acre walled kitchen garden with potting sheds, 4 greenhouses and a gardener’s cottage was being run by tenants as market garden. (1971 sale catalogue) The kitchen garden was redesigned after the hall was sold to the Beans in 1974 and incorporates a pool. (Inf. from Sally Bean)

A large amount of the open parkland created in the 19th century has been returned to arable, although some trees survive.

The plantations created by Philip Saltmarshe in the first half of the 19th century around the perimeter of the open parkland survive as mapped in 1855.

A fish pond was made in 1818, almost certainly on a site south of the kitchen garden where there is still a small pond.

Documentary material:    A vast number of documents relating to the Saltmarshe estate, which had remained in the hands of the same family since the Middle Ages, were sold in 1971. Many of these documents have been collected together by the East Riding Archives and Local Studies Service [ERALS], catalogued as DDSA, and have been used in compiling this report. Material located in other repositories includes 19th-century papers (not catalogued) at the former Hull Local Studies Library, now part of Hull History Centre.  Another small collection purchased by a private collector, John Goodchild, may be consulted via the Local History Study Centre at Wakefield. This collection includes a plantations book 1806-1810 and garden expenditure accounts 1821-37, which may repay investigation. Some material remains in private hands. We are grateful to Mrs Sally Bean for sharing information about the Saltmarshe estate.