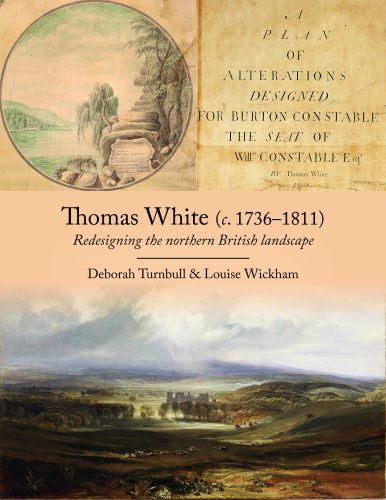 This book aims to restore the reputation of White who in his time was as well respected as his fellow landscape designers Lancelot ‘Capability’ Brown and Humphry Repton. By the end of his career, he had produced designs for at least 32 sites across northern England and over 60 in Scotland. These include nationally important designed landscapes in Yorkshire such as Harewood House, Sledmere House, Burton Constable Hall, Newby Hall, Mulgrave Castle as well as Raby Castle in Durham, Belle Isle in Cumbria and Brocklesby Hall in Lincolnshire. He has a vital role therefore in the story of how northern English designed landscapes evolved in the 18th century.

The book focuses on White’s known commissions in England and sheds further light on the work of other designers such as Brown and Repton, who worked on many of the same sites. White set up as an independent designer in 1765, having worked for Brown from 1759, and his style developed over the next thirty years. Never merely a ‘follower of Brown’, as he is often erroneously described, his designs for plantations in particular were much admired and influenced the later, more informal styles of the picturesque movement.

The improvement plans he produced for his clients demonstrate his surveying and artistic skills. These plans were working documents but at the same time works of art in their own right. Over 60 of his beautifully-executed coloured plans survive, which is a testament to the value his clients placed on them. This book makes available for the first time over 90% of the known plans and surveys by White for England. Also included are plans by White's contemporaries, together with later maps, estate surveys and contemporary illustrations to understand which parts of improvement plans were implemented.

See https://www.oxbowbooks.com/oxbow/blog/2021/11/17/running-an-18th-century... for a piece by Louise Wickham on running an 18th century landscaping business