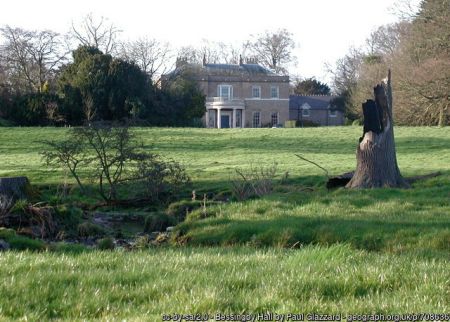 A small compact landscaped park laid out in the mid 18th century next to Bessingby Hall and little altered.

Bessingby was held by the king in 1086 and by Walter de Gant in the early 12th century.  Part of the estate was granted to Bridlington Priory by 1124 and the rest by Walter’s son Gilbert de Gant by 1153. The manor of Bessingby was held by Bridlington priory until its suppression in 1537, and then by the Crown until 1616 when it was granted to George Villiers, later duke of Buckingham. Villiers sold it in 1618 to the tenant Thomas Styring, whose son Francis conveyed it to Richard Staveley in 1659.

Hudson was evidently already resident at Bessingby by 1761. (ERALS, DDX1589/2/3). The Hudson family owned the estate until 1868 when it was sold to George Wright.  Bessingby Hall and grounds were sold by  Wright family in 1979.  Bessingby Hall then became a nursing home. It is now owned and run by Burlington Care Co.

The owners chiefly responsible for the landscaping were:

A manor house was recorded in the 13th century and early 16th century (Allison, VCH Yorks ER, II,18). The chief house, presumably the manor house, in 1672, occupied by a Mr Stables, was quite substantial and had eight hearths (National Archives, E179/205/504). The location of the manor house is unknown; it could have been on the site of the present hall or possibly is represented by Hall Farm, Main Street, which is in part 17th century.

The parkland south of the present hall is called Hall Close on the plan of 1769 which may suggest the grounds of the manor house. This could also relate to Hall Farm which lies at the south-west corner of the former Hall Close.

The parkland appears to have once been open field land as air photographs show ridge and furrow.

The grounds and parkland of Bessingby Hall were probably laid out in the mid-18th century possibly following the acquisition of the estate by John Hudson in 1765 and the enclosure of the open fields 1766-8.

The hall built, or rebuilt, at this time and shown in a watercolour of 1805 looks to be of the mid-18th century. A post-enclosure plan of 1769 shows what must be a newly planted landscape (HHC, U DDCV/13/1). There is a plantation located on the southern edge of Hall Close clearly to hide the village from view. Another plantation, High Wood, is on the hillside to the north of the hall and road. The field between High Wood and the main road is called Park or Summerhouse Close, the latter name referring to the summer house, presumably the circular feature in front of a clearing at the east end of the wood.

To the north-east of the hall was woodland, and to the north-west a regular plantation, possibly an orchard. The walled kitchen, measuring  just over half an acre, is shown occupying the north-west corner of Hall Close.

In 1774 Bessingby Hall was said to have ‘good gardens walled round and planted with choice fruit trees’. Near the house there were ‘several ponds stocked with fish, flourishing plantations, shrubberies and pleasure grounds with agreeable walks, etc.’ (York Courant 1 Mar. 1774). The shrubberies and pleasure garden described as ‘laid out in taste’ in 1778 would have been in the area shown as woodland to the north-east of the house in 1769. (York Courant 1 Dec. 1778) The location of the fish ponds is not known although two ponds are marked on the 1769 plan.  The description in 1778 mentions an orchard, the large kitchen garden ‘planted with the best sorts of good bearing Fruit-Trees’, several ‘healthy’ plantations extending for nearly two miles and an ‘Observatory’.  The last might have been the summer house in High Wood.

Harrington Harrison inherited the estate soon after his birth in 1772, but did not take on its management until he was 21, or more particularly after 1795 when he married Lady Anne Townshend, daughter of the 1st Marquis Townshend. A plan of 1800 shows little change to the park and grounds from 30 years earlier.  A strip of land on the east side of the park had been purchased from John Greame of Sewerby and incorporated in the grounds. The planting to the north-west of the house was less formal and the open areas in High Wood to the north of the summer house and further east had been planted.

A visitor in August 1802, Dorothy Richardson, provided the following brief description of the grounds:

‘The situation is delightful being highly elevated on the side of the Hill with a very extensive tufted lawn descending from it terminated at the bottom by a belt which encloses it from the road...The Stables stand north east of the House & have a center & two wings with a back ground of wood but are entirely hid by wood except from the entrance into the shrubbery which lies before them & is of great extent terminating at the public road to Carnaby & Burton Agnes; one walk winds thro’ a wood with roses & other flowering shrubs on each side, but so full of thistles & other weeds that I am certain a spade has not been put into it this year...The top of the Hill behind the House is covered by a very long plantation but so narrow that the light appears thro the stems of the Trees, which always looks ill. In front of them stands a Summer house which must command a very noble view.’ (John Rylands Library, English MS 1126)

Three years later in June 1805 another visitor, Fanny Waring, painted watercolours of Bessingby Hall and grounds from the south-east and a picturesque thatched gardener’s cottage. Harrington Hudson had the hall rebuilt in 1807 to the designs of Thomas Cundy senior of London and between 1805 and 1810 bought four cottages and their garths which were then demolished to make an orchard (Allison, VCH Yorks ER, II, 19).  The location of this orchard is unknown but it may not have been part of the grounds of the hall.

Bryant’s plan of 1829 suggests that Harrington Hudson (d. 1826) made no significant changes to the layout of the grounds except for the removal of the plantation at the southern edge of the parkland. This change is evident on the 1st edition Ordnance Survey plan of c.1850  that also shows the extension of the shrubbery westwards from the house to the walled garden.

By the 1850s the walled garden had doubled in size to just over one acre. The road that had run along the west side of the walled garden in 1800 had been diverted further west and a small triangle of land that included the gardener’s cottage had been added to the grounds. The area of woodland in the south-west corner of Hall Close or Field, north of Hall Farm, was an orchard in 1859 and as shown on the 1850s Ordnance Survey plan contained a pond (HHC U DDCV/13/5). Sale particulars of 1865 refer to the ‘spacious gardens’, ‘vineries’, ‘the pleasure grounds, shrubberies and the laurel walk with the avenue’ (HHC C DBHT/9/84).

The sale plan of 1865 and Ordnance Survey plans  of the late 19th to mid 20th century show that the layout of the grounds remained largely unchanged. Between 1865 and the late 1880s the area between Hall Farm and the walled garden was made into a plantation and between 1890 and 1911 small plantations was created on the southern boundary of the park, one seemingly to hide the row of cottages near Manor Farm and the other to the north of Bessingby Cottage Farm. The latter plantation was removed between the 1920s and 1960s as were the row of cottages.

Following the sale of the estate in 1979 the walled gardens, which had long been disused, were cleared and a house built within the walls.

Bessingby Hall and park lie to the south of the A614 just 3.3 miles west of Bridlington railway station.

The parkland is bounded on the east by a lane called Brick-kiln Balk, on the north by the A614 and on the south by Main Street. The west side is bounded by housing and a lane leading from the village to the A164.

The parkland is on the lowest edge of  the south-eastern dip slope of the Wolds. The land rises slightly from 15m to 30m AOD from south to north. The bedrock is chalk (Flamborough Chalk Formation) and the surface deposit is boulder clay (Till of the Devensian period).

Bessingby lies within the East Riding Landscape Chracter Assessment Area 19C North Holderness Open Farmland. The area is dominated by arable farmland which provides the setting for the parkland. Nearby to the east and south-east at Bridlington are housing and industrial estates.

In 1778 it was stated that the situation of the house and grounds at Bessingby ‘is most delightful, commanding, amongst a Variety of Pleasing Prospects, a most picturesque View of Burlington Bay, the Flambro’ Cliffs, and the Towns of Burlington and the Quay, which surpasses any Description that can possibly given in an Advertisement’. (York Courant, 1 Dec. 1778)

The parkland is entered from the A614 at the north-east corner. The drive through the former shrubbery from the entrance lodge (Bessingby Lodge) to the front of Bessingby Hall is some 300 m. in length.

Bessingby Hall was rebuilt in 1807 for Harrington Hudson to designs of Thomas Cundy, senior. Built of yellow brick with a hipped slate roof, it is of two storeys and five bays. The central bay of the south front is slightly recessed with a segmental porch with Greek Doric columns and balustrade above. To the north is a mid 18th-century red brick service wing

The grounds have not been visited but air photographs suggest that the garden area around the house is limited and is chiefly lawned with some flower borders. The area shown as shrubbery on the 1850s Ordnance Survey map, between the house and the lodge, appears to be intact with trees and bushes as in the mid-19th century.

The mid-18th/early 19th century brick wall surrounding the former kitchen garden largely survives.  The interior has been cleared for a large private house and grounds.

The parkland remains much as it was in the 18th and 19th centuries, an area of grassland grazed by cattle and sheep with trees planted in small clumps or as isolated specimens,  identified trees include ash, beech, oak, horse chestnut, black pine and sycamore (Bessingby Conservation Appraisal, East Riding of Yorkshire Council, 2009, 4).

High Wood, the mid-18th century plantation on the hill side north of the parkland and the A 614, still existed in 2013.  The land between it and the road is arable farmland.

Survey and Valuation of Bessingby 1859. Hull History Centre(HHC)  U DDCV/13/5