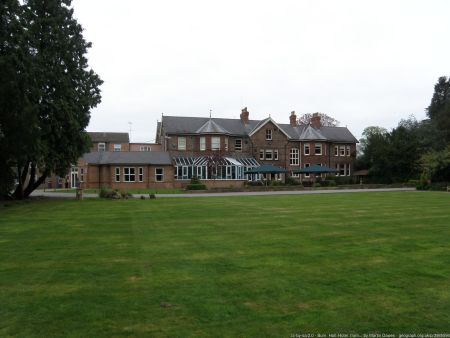 Burn Hall has a modest park and garden of 100 acres, which was developed in the late 19th century alongside the main house. It was further enhanced by its then tenant in the 1930s with many specimen plants put in. Since its conversion from a private home in the 1960s, some of the historic garden has now been lost but a significant amount of the original landscaping remains.

‘A good farmhouse, foldyard, productive orchard and garden and good farm buildings together with about 210 acres of good grass and arable land’ (Yorkshire Post and Leeds Intelligencer, 9 December)

It was once again let out (Yorkshire Post and Leeds Intelligencer, 1 November 1884) until William Richardson took possession about 1886. Two years later, he built the current Hall that was described thus:

Huby Burn is a large brick mansion, the seat and property of William B. Richardson, Esq., J.P., and alderman of the County Council, by whom it was erected in 1888. It is pleasantly situated, and commands some fine views of the Hambleton Hills and the surrounding country (Bulmers Directory, 1890).

By 1901, the main residence was called ‘Burn Hall’ with a site 500m to the east now called ‘Huby Burn’. In the 1901 census, a gardener, John Winterburn, is living in ‘Huby Burn Cottages’. Also listed at the main house is an undergardener, George Pegg.

Richardson died in 1905 and his widow, Sophia, continued to live there until her death in 1926. Richardson’s nephew, Thomas Hilyard Richardson, inherited his property. He lived in Australia and so Burn Hall was rented out. Its tenant from 1932 was Adela Shaw (Yorkshire Post and Leeds Intelligencer, 11 January). When she died in 1962 it was put up for sale. It was acquired by the Water Training Institute, which used it for a technical training centre. In 2006 planning consent was obtained to operate Burn Hall as a hotel and the site was put up for sale six years later (Sale brochure 2012). It is now independently owned and is part of the Best Western hotel marketing group. The former walled garden is occupied by the York Bird of Prey Centre.

Burn Hall lies about 3 miles south-east of Easingwold, between the villages of Tollerton and Huby. It is on a slightly sloping site from north to south, with the main house at 20m AOD. The historic parkland covers about 100 acres, divided between the northern half surrounding the Hall and gardens and the section to the south of Tollerton Road. The boundary to the south-east is marked by the watercourse ‘Huby Burn’, while on the west, it follows the parish boundary. The southern extent is marked by the old field division running from SE 538647 to SE 543649. The northern boundary runs along the walled garden until SE 538 655, then includes an additional piece of parkland to SE 538 657.

In addition to the house, there were a series of outbuildings listed in the sale catalogue (c1962) including a range of extensive heated greenhouses, potting shed, detached brick fruit store and cold frames. These buildings have since been demolished, probably after the sale to the Water Institute. A walled garden survives, although it is no longer in use. The Dale plantation, part of the landscaping of the 1890s still survives to the east.

The gardens immediately to the south of the Hall had a raised terrace with parterre and an extensive lawn by the 1930s, which is shown in the later sale catalogue. To the west were a pond, rockery, shrubbery and rose garden, with perimeter planting of evergreens. Mrs Shaw opened her gardens to the public and two reports from 1937 describe them:

There is something very satisfying about these gardens at Burn Hall. They are simple, unostentatious, and yet planned so skilfully that their charm does not want as the year passes but merely changes in nature. Even in the depths of Winter there are always some flowers to be found, and even were there none, the tall conifers, cupressus and cedars, standing like impressive sentries round the Hall, would be impressive enough.

Although the season is backward this year the drive is already flanked by daffodils and thousands of primula Wanda in full bloom. On the terraced lawn there are beds of the brilliant yellow polyanthus 'Barrowby Gem' which is surely the best of all the polyanthus family and yet rarely grown so well or in such masses as here. The rock garden boasts a show of primulas, including P. rosea, a host of humbler primroses and many heaths.

This is truly a gardener’s garden and those gardeners who are wise enough to visit it on Sunday will find as much interest in the long rose-walk with its faultless pruned bushes – an object lesson for the amateur this – and shrubs whose glory does not come until Autumn, as in the plants now in flower. But their wives will very properly insist upon being taken forthwith to the greenhouses, where they will find beauty and colour enough to make even the longest and dullest Winter bearable. In full blossom now are the camellias, those lovely, exotically red flowers which so mysteriously passed out of favour some years ago and are now winning their way back. There are enormous arum lilies, schizanthus which look like cascades of brilliant butterflies, cyclamen and those heavenly twins the primulas obconica and malacoides. (The Yorkshire Post, 16 April 1937)

Visitors who had a delightful day when these gardens were open in April will be wondering what has taken the place of the early spring bloom that made Burn Hall such a blaze of yellow and red and orange. When I wandered through the gardens a day or two ago, Mrs Shaw, who delights in visitors on these open days, was anxious that the newly-planted summer beds should be at their best for Sunday.

The first thing that will catch your eye will be, not only the great curtains of rhododendrons screening the wild garden, but the young bushes of rhododendrons, the Pink Pearl and Unknown Warrior that fringe the outer edge of the rock gardens. The blooms, in shape and colour, are perfect. Here every kind of rock plant has a home, and down the steps to the pool, and over the paths creeps Mother o’ Thousands (Numalaria), the pale moss starred with millions of tiny white flowers.

This is an in-between season, spring flowers are almost over, summer flowers are hardly out, but there is much to see at Burn Hall. Lupins, and tree lupins are out; Madonna lilies, foxgloves and peonies are well on the way. Liliac is in full bloom; so are pyrethrums, azaleas, geums, rock roses, borders of lavender and catmint, beds of violas and the drooping fingers of laburnum. You must not miss the beds of begonias. They have only recently been planted out, but are already in bloom.

The causal visitor’s delight will be in the colour of the plants, the wide lawns swept with the lower branches of tall firs, the long green paths bordered with golden privet columns, walls of rhododendrons, broom and various berberis. Those with a palate as well as an eye will wander around the walled kitchen gardens and examine speculatively the strawberry beds and blackcurrant bushes.

But the amateur gardener will leave only with reluctance the hothouses, where not only the vine and the fig and tomato already bear the first of their fruit, but where the more delicate plants are reared for the late summer flowering season. (Yorkshire Evening Post, 4 June 1937)