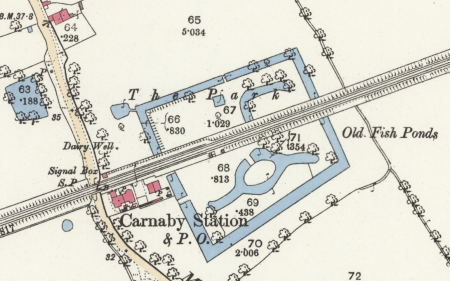 The site of the late 18th – century Dutch Farm at Carnaby is of particular historic interest retaining as it does significant remains, in its plan and water features, of  a rare, albeit modest, example of a English version of Marie Antoinette’s Hameau de la Reine built in 1783 at Versailles.

The overlordship of the manor of Carnaby belonged to the main branch of the Percy family from the early 12th century until the 17th century. A minor branch of the Percy family were under-tenants, passing for a time to the Heslerton family in the 14th century. The manor was held by the Hilton family by 1428.  In 1573 it was conveyed by William Hilton to Thomas Layton who soon afterwards sold it to William Strickland of Boynton Hall.  It descended in the Strickland family until 1952. (Allison, VCH Yorks ER II, 126)  Present owners unknown.

Until the 18th century the site appears to have been part of the East Low Field of Carnaby. This large open arable field was probably enclosed between 1716 and 1726. (Allison, VCH Yorks ER II, 128)

In 1368 the manor house of Walter Heslerton at Carnaby was called ‘le Parke’. (Calendar of Inquisition Post Mortem, xii, 181) Because of the presence of a moat and the use of the name The Park for the area on the 1850s Ordnance Survey map it has been assumed that the manor house stood on the site of the Dutch Farm. (Allison, VCH Yorks ER II,127). This may not be correct and Loughlin and Miller were not convinced about the authenticity of the moated site which they record as ‘somewhat doubtful’. (Loughlin & Miller,  Archaeological Sites, 86)

The unusual shape of the inner canal with its arms is almost identical in form to duck decoys which were a common feature of the Hull Valley from the mid 17th century. (Van de Noort & Ellis, Wetland Heritage of the Hull Valley, 102, 179)  Could the feature have begun as a decoy?

The Dutch Farm or Dairy was probably created around 1780 for Lady Strickland. It was, in Karen Lynch’s view,  ‘in the spirit of Marie Antoinette’s petit hameau at Versaille - a plaything for the ladies offering an escape from the formality of the big house’. (Lynch,  ‘Taking great notice’, 4)

The farm is not marked on Jefferys’ map of 1775. The first mention of what must be the Dutch Farm occurs in an account book commencing in 1780 which appears to have been kept by Lady Strickland. (Strickland account book) In 1783 Delft ware was purchased for Carnaby, and again in 1787.

The farm soon became an object of interest for visitors to Bridlington. In 1793 the author and poet Anna Seward visited  ‘a sweet sequestered umbrageous glen, where Lady Strictland [sic] has erected a farm-house and a dairy-house in the Dutch style. A brook intersects the circular meadow, and flows around the buildings, resembling the dikes of Holland, with Dutch bridges over it’. ( Seward, Letters of Anna Seward, III, 306)

Dorothy Richardson who visited the Dutch Farm on 2 September 1802 provides the fullest account and, most helpfully, a sketch plan. (Lynch, ‘Taking great notice’, 5)

A square outer moat, or canal as she termed it, was crossed by a footbridge leading to a circular inner canal with four curved arms. The inner canal surrounded a raised circular area, reached by another footbridge, on which there was an octagonal ‘tea room’ with kitchen attached.

Dorothy Richardson noted that the farm:

wanted the Dutch neatness for the water of the square canal is not only stagnate but almost covered with weeds, the sides are tufted with birch wood intermixed with some handsome single trees; this tho’ broader than the inner canal is narrow, & we crossed it over a wood bridge painted white, & of Dutch construction’

She describes in detail the design and furnishings of the picturesque thatched dairy, situated on the west side outside the outer moat, and the tea room and kitchen. (Lynch, ‘Taking great notice’, 4, 6.)

It is called ‘Lady Strickland’s Dutch Farm’ by Dorothy Richardson, but on Teesdale’s East Riding plan surveyed 1817-18 it is recorded as ‘Dutch Dairy’ and as ‘Dutch Farm” on Bryant’s plan of 1827-8. The farm, an ‘agreeable retreat … furnished in the Dutch style’ was said to be ‘used as an occasional tea room’ by the Stricklands in 1830, but it was probably virtually abandoned after the death of Sir William Strickland, 6th Bt, in 1834.  (Furby, Picturesque Excursions, 18)

No objection was made in 1844 when the proposed railway line from Hull to Bridlington was routed through the centre of the Dutch farm. By this date the tea room had evidently been dismantled but the dairy remained, recorded as a ‘summer house’. (Lynch, ‘Taking great notice’, 12) The railway line was opened in October 1846 cutting the Dutch farm in half, but fortunately leaving untouched the greater part of the canals that remained on either side of the track.

Ordnance Survey maps from 1854 to the present day show surprisingly little change over the last 160 years.  In the 1850s all of the square canal remained except where cut through by the railway track, and the circular, or rather oval, canal and three of its four arms. The long north-east arm was detached from the inner canal by the track, and the north-west had gone, presumably filled in for the railway.

Ordnance Survey maps published in 1892, 1911 and 1928 show the same features, but those published in 1966 and later do not have the outer square canal marked south of the railway line, and the inner canal and its southern arms are only marked with a dashed line.  The square canal and the detached north-east arm north of the track are shown unaltered.

It is possible that there was some infilling of the canals to the south of the track following the sale of the remaining part of the Strickland estate in 1952. Fieldwork however indicates that most of the features survive as in 1850, although now overgrown.

The site, which is intersected by the Bridlington to Driffield railway line, lies 600m. south-east of Carnaby village, just east of the former Carnaby railway station.

The outer bank of the square canal, or its former route, form the boundary of the site.

Lowlying around 10 m AOD.   The site has been described as ‘very marshy’ and the area immediately to the south was known as Flashdales meaning ‘strips of land in the marsh’. (Loughlin & Miller, Archaeological Sites, 86; Allison, VCH Yorks ER II, 128) The bedrock is chalk (Flamborough Chalk Formation) and the superficial deposits boulder clay (Devensian Till). (Geological Survey)

The site is cut through by a railway line, with farmland to the north and east, a large industrial building immediately to the south, and a busy road leading to Carnaby Industrial Estate to the west.  It lies in East Riding Landscape Character Area 19C North Holderness Open Farmland.

No public access. The northern section can be reached across the pasture field to the north. The southern section is accessible near the cottages to the east of the former station.

Both sections of the site are much overgrown with trees and bushes covering the earthworks and little of the outer canal or moat or so-called fishpond can be seen in the air view above. Fieldwork revealed that much of the original form of the Dutch farm still survived.

N. Loughlin and K.R. Miller, A Survey of Archaeological Sites in Humberside, 1979