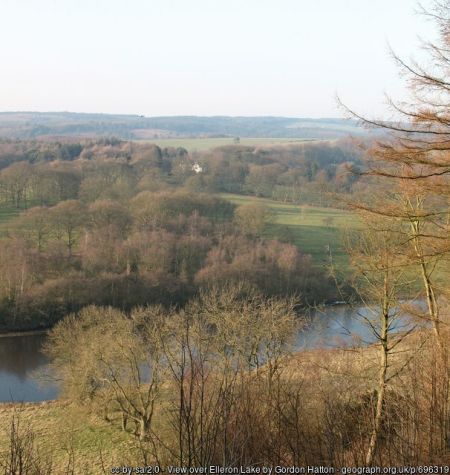 The designed landscape around Elleron Lodge was largely completed by the early 1870s to complement the new shooting lodge, which was a country residence for a local solicitor, John Watson. Using the natural advantages of the setting, the design included lawns, flower beds and a small fishpond near the main building with planting alongside the stream to provide more picturesque walks further afield. In the mid 1880s, a lodge and new carriageway were added at the extreme south to provide an attractive route for visitors. It remained largely unaltered until the c. 1918 when the large Elleron Lake was added to the south. Today this designed landscape is a well preserved example of gardens associated with Victorian shooting lodges.

Prior to the ownership of John Watson from c. 1864, it is not clear who owned the land. The 1861 census lists Richard Wilson as the occupant of ‘Elleron House’ but he was likely to be a tenant farmer. In 1882, John Watson put the estate up for sale and it was acquired by Alderman Frederick Priestman the following year (The Bradford Daily Telegraph, 11 May). Priestman decided to sell the estate in 1908 (Sheffield Daily Telegraph, April 11) and it was bought Bernard Lucas (Driffield Times, 20 February 1909) but he died intestate two years later (Manchester Courier, 26 September). It was then sold to Cornelius Wilfred Paine and he owned it to at least 1939. By 1947, it was once again put for sale (HEA SA00768) and was bought by Colonel Charles Wilson who died in 1949. In 1974, the estate was bought by Charles Littlewood Chafer who lived there until his death in 1999 (Country Life, 2 October 2017). His widow remained until her death and the estate was sold by her heirs in 2017.

Key owners responsible for major developments of the designed landscape and dates of their involvement:

The first edition OS 6” map, surveyed between 1848 and 1849 (Figure 1), shows Elleron as an area of low-lying farmland. There are two unmarked sets of buildings, described in the census of 1861 as the farmhouses ‘Elleron House’ and ‘Low Elleron House’. These are in the position of the later Elleron Lodge and Elleron House Farm.

[At] the kind invitation of Mr John Watson to pay a visit to "Elleron Lodge", his delightful country residence on the moors, between five and six miles from Pickering... Arrived at the Cawthorne Hills we find the gate open, and a road formed and newly made, descending for nearly a mile down the steep edge of the adjoining moorland gradually to Elleron Lodge. Its features in a few years will be fully developed, and the ornamental trees, plants, and shrubs will have attained proportions so as to change it into a smiling oasis in the midst of the barren desert. The watercourse in the valley has been taken advantage of to form a beautiful miniature lake, and the most exquisite taste has been shown in the formation of its surroundings. The rustic bridges, the winding walks, the lovely dells, and the murmuring waterfalls and cascades, with verdure, ferns, and flowers, will in time make it a perfect paradise. Altogether the scene is one of great beauty, and may the genial owner, who ten years ago commenced building the lodge, and who since that time has been enclosing, planting, and road making, long survive to see the work of his hands in that state of perfection that time will eventually give to it.

The lodge is built on a gentle eminence looking south facing the valley below the Cawthorne heights, and is fitted up in elegant style, and occupied by the owner during the few months of summer…we prepare to depart, our kind host leading the way to the Roman road... Having gained the summit, a magnificent prospect opened out on every side, showing with what prescience the Romans had chosen this elevated plateau for a permanent fortified position. On this heath-clad table-land, with the slopes and sides softened with the young fir plantations.

It was acquired by Frederick Priestman the following year and an article in The Bradford Daily Telegraph of 11 May mentioned that the old Roman road...

has been preserved in its original state on the property, and now forms a walk through one of the plantations’ and that the lodge stands ‘in pleasure grounds of considerable extent, which are prettily laid out, and contain, in addition to a sheet of ornamental water, an extensive rockery and outdoor fernery, flower garden, lawn tennis ground and shrubbery. The whole of the cultivated portion of the estate lies in one block surrounding the house and pleasure grounds. It is well wooded, and the plantations... are traversed by delightful walks leading through natural wooded dells, with which the neighbourhood abounds’.

Between 1883 and 1888, a lodge (still extant) designed by W.H. Herbert Marten, was added to the south (The Architect, 25 May 1888), enabling a new route through the Roman Camps Plantation (Figure 3). Priestman decided to sell the estate in 1908 and it was thus described: ‘An attractive freehold sporting estate of about 785 acres, known as Elleron Lodge including... Old World Gardens, tennis lawns, woodland walks, Ornamental Lake and Trout Stream, productive kitchen garden, model farms, two lodge entrances and cottages... beautiful woodlands with rhododendron walks’ (Sheffield Daily Telegraph, April 11). Cornelius Wilfred Paine added the large southern lake c.1918 (information from Stuart Plant) and this is shown on the 1927 OS map (Figure 4). There was a small amount of clearance of trees around main house by 1927 and area to west of it was cleared completely by 1950 (Figure 5), otherwise the historic designed landscape has remained intact.

The northern boundary is formed by the plantations to the north of the main house running from SE 785 912 to SE 789 912. The western limit runs from the house south to the edge of Roman Camps Plantation and then from SE 786 900 to the public road (‘Bradley Road’), which forms the southern boundary. The eastern boundary follows Low Moor Road north from Bradley Road to SE 790 906 and then follows the eastern edge of the pleasure grounds to SE 789 912.

The Elleron Lodge estate lies in North York Moors National Park Authority’s Landscape Characterisation Area of Forest Landscape, an extensive area of forested land forming part of the North Riding Forest Park. These are gradually rising upland areas on former moorland or moorland fringe areas, abutting open moorland and falling away towards the limestone escarpment in the south. Elleron Lodge itself is at 168 AOD and the land slopes down eastwards to the fishpond at 148 AOD. It also slopes southwards to the lake at c. 140 OD before rising again to c. 190 OD near the site of the Roman camp (now a plantation). It then falls again to the southern lodge at 154m AOD.

Between 1883 and 1888, a lodge designed by W.H. Herbert Marten, was built to enable a southern route from Bradley Road, via the Roman Camp plantation.

The entrance at SE 789 903 was in place by 1891 and may have been the original entrance to the estate prior to gate lodge, as the report from 1874 refers to passing through gates before a one mile carriageway leading to the Lodge.

Date of exact construction unknown but was in place by 1871 when listed on census.

These lie mainly to the east of the building and covered just under 22 acres (Figure 2). To the north and west of the Lodge and beside the stream running south were mixed plantations. Due east was an open area of lawn with a fishpond to the extreme east. From contemporary reports by 1883, it had ‘an extensive rockery and outdoor fernery, flower garden, lawn tennis ground and shrubbery.’ (The Bradford Daily Telegraph, 11 May).

Although ‘productive kitchen garden’ is mentioned in the sale notice of 1908, no obvious walled structure is shown on the OS maps so location is unknown.

There is an open area to the south of the pleasure grounds (marked 1894, 1895 and 1896 on Figure 2) that may have been parkland. To the south of this are three areas of plantations totalling 13 acres. The Roman Camp plantation at the southern edge of the estate was over 231 acres but it is not clear how much of this was owned by the Elleron estate.

Elleron Lake measures about 7½ acres and was constructed about 1918. A small fishpond was put in the original design and measured c. ¼ acre.