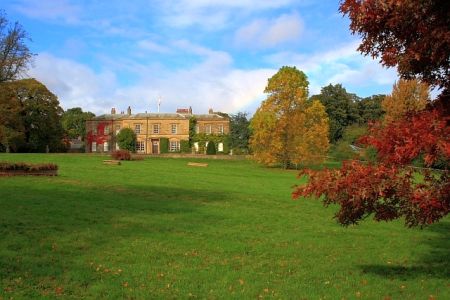 Camp Hill park and garden was first developed in the first half of the 18th century by its owner, James Hoyland, who was the head gardener at Castle Howard. It appears that he never lived there and a lack of archive material means that the extent of his involvement is unclear). The designed landscape that we see today probably dates from the early 19th century, when William Serjeantson rebuilt the main house. In addition to ornamental and kitchen gardens around the Hall, there was parkland to the north and south, together with extensive plantations that largely remain intact.

Originally known as ‘Badger Hall’, the first known reference is in 1741 when the death of William Malthouse of Badger Hall was recorded in the parish records. In 1709, the land was owned by Francis Brown when he mortgaged it for 2000 years to John Bendlows (of nearby Howgrave Hall, Sutton Howgrave). On the 25th January 1733, it became legally vested in John Etherington of York in trust for James Hoyland who had purchased the mortgaged site (LULSC YAS MD117/111).

James Hoyland (c1691-?) was the head gardener at Castle Howard. In the Poll Book for the election of 1741, he was listed as living at Castle Howard, with his freehold at Carthorpe, so he may never have lived at the Badger Hall estate. However his widow, Mary, was resident in 1767, when an agreement was drawn up between her and Archilaus Hoyland, son of James’ cousin and heir, Anthony, whereby in return for a payment, she was able to continue living there (LULSC YAS MD117/104). James Hoyland had acquired the core estate of 60 acres from the trustees of the late John Brown (son of Francis?) and added land acquired from Christopher Tanfield (50 acres), William Routh (2 acres) and John Tanfield (10 acres) by 1767. In addition, the estate included the following:

Whether James Hoyland was responsible for erecting these buildings and the plantation is not clear. Figure 1 shows the extent of the estate using information from the 1839 tithe map and award that uses historic field names. By 1770, Mary Hoyland had moved out and it was occupied by two tenant farmers: Mr John Barrow (or Barugh) having a ‘Messuage or dwelling house and orchard called Badger Hall’ and William Mitchell ‘one other Messuaqe or Tenement and several closes, 121 acres’ (LULSC YAS MD 117/107).

In 1770, there was an agreement with regard to the estate between John Pickersgill of Ripon and Archilaus Hoyland. It appears to give the former ‘behoof’ or use of the estate subject to a payment but leaving Hoyland as the owner, with an annuity paid to Mary Hoyland until her death (LULSC YAS MD117/111). Mary died in 1779 and Archilaus Hoyland in 1788. The property was sold to the Rev. Josias Lambert sometime before 1789. Before his death on 25 March 1799, Lambert had added a further 10 acres at Burton High Gates. He also changed the name to ‘Camp Hill’ reflecting the Anglo-Saxon entrenchments (Lukis 1870, 175).

It was bought by William Rookes Leeds Serjeantson later in 1799 from Josias Lambert’s estate. It is described as:

Between 1839 and 1853, extensive woodland was laid out to the east and called ‘Hallgarth Moor’, (later Camp Hill Plantation) on land owned by the Earl of Ailesbury in 1839. Kirklington High and Low Wood was in place by 1840 and owned by Hon. Charles Harward Butler Clarke Southwell Wandesforde (1780-1860). It is not clear whether this became part of the estate at a later date.

Colonel William Rookes Leeds Serjeantson died in 1840. His son, George Serjeantson, inherited the estate and died on the 21 Dec 1889, leaving the property to his cousin James Serjeantson (who had predeceased him in 1886) and his heirs. They put it up for sale in 1891 (NYCRO TD 2 MIC 1048) and it was described thus:

Mansion stands on a hill surrounded by a park. The Gardens and Pleasure grounds are tastefully laid out in Lawns, Terraces and Shrubberies.

It was bought by Captain Francis Horner Reynard in 1896, who also acquired the nearby East Lodge Farm in 1906. Captain Reynard died on the 9 November 1931 and the estate was put up for sale the following September. It was bought in May 1933 by Captain C D Leyland, who then sold it in 1945 to R D Ropner of Stockton-on-Tees:

Sale of the residential estate of Camp Hill to Mr RD Ropner. The estate extends to about 530 acres and comprises the residence of Camp Hill. In the gardens, park and adjoining fields are the remains of a series of entrenchments which give their name to the house and to a large wood nearby. (Yorkshire Post and Leeds Intelligencer, 25 August 1945)

The estate remains with the Ropner family.

Camp Hill park and garden is situated just under 1.5km (1 mile) south of the village of Carthorpe and about 13.5km (8 miles) west of Thirsk. The historic designed landscape covered just under 40 hectares (100 acres) of gardens and parkland (Figure 4), with a further 100 hectares (250 acres) of woodland (Camp Hill Plantation and Kirklington High and Low Woods) to the west (Figure 4). It is bounded on the east by the Carthorpe to Kirklington Road, on the north by the ancient entrenchments and to the west by woodland detailed above. The southern boundary runs from SE 315 821 in the east to SE 311 819 in the west.

The main building is on a hill at 49m AOD with the surrounding parkland at 40m to 45m OD. The woodland to the west is at 45m to 50m OD. The main entrance is to the south from the Carthorpe-Kirklington Road. Camp Hill House is listed Grade II and described in the Historic England Register of Buildings as a small country house of the early 19th century. There is also an ice house, listed Grade II and described in the HE Register as late 18th century, made of red brick and largely covered in earth. It is circular in plan, with a brick barrel-vaulted entrance passage, which has been extended. Three steps lead to a circular chamber 8ft deep with domed roof.

The gardens around the Hall date from before 1839 and may well have been put in place around 1820 when the main Hall was (re)built (Figure 5). Immediately to the north is a rectangular walled garden, which may have functioned as an additional kitchen garden or orchard. Beyond this is an area of shrubbery and trees. To the north west of the house is a second walled garden that has three straight sides with the north western corner cut off, where there was a well.

To the south of this is an area with glasshouses, of which the one that is freestanding north of the main range possibly the hothouse that is referenced in the tithe award. Here they may have grown grapes, where in 1829, the following was noted: ‘Prize for Black grapes to Mr A Kirkpatrick gardener to Colonel Serjeantson (Black Hambro)’ (Yorkshire Gazette, 26 September 1829). A century later, Captain Reynard was clearly maintaining these gardens as he advertised for: ‘Wanted experienced gardener inside and out, vines, peaches, chrysanthemums, carnations etc under-man kept – Camp Hill’ (Yorkshire Post and Leeds Intelligencer, 20 May 1916).

The parkland to the north and south was created before 1839 and extended before 1853 southwards incorporating the parts that are in Kirklington parish and had previously been rented. This area then reverted to farmland before 1928. There were three ponds shown on the 1839 tithe map to the west of Home Farm and which were extant by 1853 (Figure 6), although only the largest square one remained after 1892.