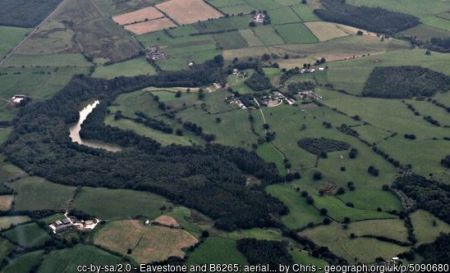 Eavestone Lake and Fishpond Wood are situated on land just off the B6265, c.9km to the west of Ripon, within the Nidderdale Area of Outstanding Natural Beauty (AONB). The landscape shows signs of historic design with its sinuous lakes which have been dammed, high gritstone cliffs and accompanying careful planting and boathouse. The lakes may have been medieval fishponds for Fountains Abbey which is located c.5km to the east and modified in the late 18th century by Lord Grantley.

The evidence that Fountains Abbey owned the site comes from a lease by Marmaduke, Abbot of Fountains to 'Emmota Lemynge, widow, and Maurice her son, for a tenement with appurtenances in Evestone' on the 23 January 1507 and land rental income totalling 28s in 1456/7 and 30s in 1535 (YAS 1981,168-9). The monastery was working a quarry in Eavestone in the mid 15th century. The Yorkshire Archaeology Society collection has further deeds and Tithe Awards for Eavestone in the Grantley MSS dated from 1586 until the 19th century (see A Guide to Historical Sources for Ripon and District).

It appears that in the 18th century Lord Grantley had design work carried out to make this a more picturesque area of his extended pleasure grounds and to include distant views of Nidderdale to the north and north-west. The Ripon Gazette of the 28th June 1877 published an account by Forester, ‘A Ramble by the River Skell from its Rise to its Outfall’ which includes:

near the hamlet of Eavestone, are some fine ponds occupying the side glens on the southern slope of the main valley.  They were formed about a century ago by Sir Fletcher Norton, 1st Lord Grantley by making dams across the narrowest parts and throwing back the water. One of these is of considerable size and is known as “Grantley Lake”...and filled the upper part of it with water, at the same time clothing the lower extremities and surrounding hills with plantations of timber trees… it has the appearance of a genuine mountain lake…. Though the length is not more than a third of a mile, and the breadth much less, its curvilinear shape prevents the whole of it being seen at once and gives it an appearance of more extension than it really possesses.  At the upper end are groups of lofty gritstone rocks of considerable height, rising directly from the water, one of them bearing the name of the “Raven Crag”, which adds much to the variety of the scene.

There are obvious similarities to Plumpton Rocks (HE Register, Grade II*) laid out a few years earlier by Daniel Lascelles: both have rivers dammed to produce lakes with towering gritstone outcrops and planted to increase the picturesque experience. It is possible that Plumpton Rocks could have been the inspiration for Lord Grantley.

The 1st edition OS map (published 1854) and 2nd edition OS map (published 1890) give further evidence for the manipulation and embellishment of the site. Comparing the two editions indicates that by the end of the 19th century there were footpaths all round the southern side of Eavestone Lake, and the western end notated as ‘Fishpond’ has been modified and extended with a piece of land between it and the main lake.  There is also a ‘waterfall’ marked and it appears that pedestrians could walk towards the waterfall and “Ravens Crag”.  The Crag and waterfall would be seen from the path on the opposite side of the lake (northern side) as the Crag is today; the path being part of the Ripon Rowel Walk. The boathouse and small footbridge are marked on the 2nd edition OS map.