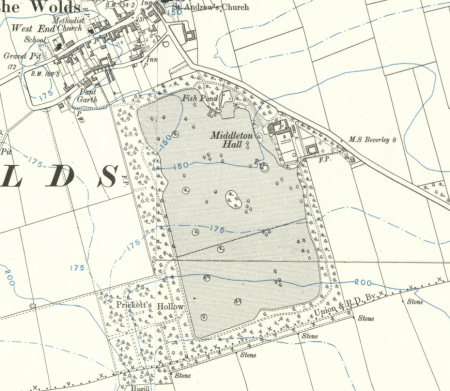 A good example of a small early-mid 19th-century park that is well maintained with its original form complete. Its plantations and the high brick wall along the road to Lund are distinctive features of the south side of Middleton village.

In 1865 the rectory house and parkland was sold to Arthur Brooksbank (1831-1903). (ERALS, Deeds Registry IT/294-6/415-7) The estate, which was greatly enlarged and the rectory renamed Middleton Hall, remained in the Brooksbank family until 1932 when sold to Walter Johnson, corn merchant of Hull, and his wife Alice. (ERALS Deeds Registry, 451/527/427). The Johnsons sold the estate in 1947 to J. Marr & Son Ltd, trawler owners of Hull and Fleetwood.

Before the enclosure of the open fields of Middleton in 1803-5 the land now occupied by the site of Middleton Hall and its parkland was part of Swan Close Field, one of the six large open arable fields in the township.  The hall site and eastern section of the park occupy 41 acres (16.5 ha) allotted at enclosure to Edward Brearey, rector of Middleton (1784-1808), who was awarded 892 acres (362 ha) in lieu of tithes. (ERALS, Deeds Registry, CI/47/3)

The western section of the parkland covering some 65 acres (26.3 ha) was part of the land allotted to the Duke of Devonshire, Lord of the Manor of Middleton.

Around 1810, Revd John Blanchard (Rector 1808-27) erected a rectory house on his newly allotted land to the south of the village and laid out gardens and parkland. The rather grand rectory, in the form of a small country house, was designed by the architect Peter Atkinson, junior, of York.

The house was built in the north-east corner of the allotted land, close to the road to Lund. Immediately to the south a walled garden was built, and to the north/north-west a shrubbery was planted. The rest of the land was laid out as parkland with plantations on the north, east and south sides. A glebe terrier of 1817 (Borthwick Institute for Archives) records the garden to the south as ‘surrounded except on the west side thereof by a fence wall’.

It is likely that the gardens and eastern half of the parkland were laid out soon after the house was built and by 1817-18 when the area was surveyed. The maps of Teesdale (surveyed 1817-18, published 1828) and Bryant (surveyed 1827-6, published 1829) show an area of parkland similar in character and extent to that depicted on the first edition Ordnance Survey map (published 1855).

In 1865 Captain (later Col.) Arthur Brooksbank, who was tenant of the rectory house by 1858, acquired the house and existing parkland from the rector, Revd H.D. Blanchard, and the Ecclesiastical Commissioners. The same year he purchased some 60 acres adjoining the parkland to the west from Ann Blanchard, widow of the Revd John Blanchard who had acquired most of this land from the Duke of Devonshire in 1838. (ERALS, Deeds Registry, FH/113/111) Brooksbank  then enlarged the park, planting clumps of trees and extending westward the plantations to the north and south. A broad boundary plantation was created on the west side.

This layout is depicted on the 1890 Ordnance Survey map which also shows a rectangular plantation, called Prickett Hollow, adjoining the south-west corner of the park.  Walks are marked in the plantations around the park with a large irregular fish pond in the north-east corner close to the road.  The walks in Prickett Hollow appear to lead to a small oval pond in the centre of the plantation.

There were no significant changes to the park and plantations in the 20th century.  The ‘Pleasure Gardens’ which consisted of  ‘two tennis courts, flower gardens, shrubberies and a small fish pond’ at the sale of the estate in 1932 were, with the exception of the pond,  abandoned and later cleared away sometime after the Second World War. The walled garden became disused and ‘several good greenhouses’ there were demolished

It is probable that the house remained empty from the end of the Second World War until it was demolished in 1963.  Since then the grounds and parkland have been maintained as part of a small shooting estate.

Middleton-on-the-Wolds is 7 miles south-west of Driffield and 7 miles north-west of Beverley.  The parkland and site of Middleton Hall is directly south of the village to the south of the road to Lund (Beverley Road).

The site is bounded on the east by a very long brick wall, around 7ft high, which runs along the west side of the road to Lund (Beverley Road), and by the plantation on the eastern side of the parkland. The boundary on the west is formed by the plantation on the western side of the parkland and the area of woodland called Prickett’s Hollow. A plantation along the parish boundary with Lund forms the southern boundary, and the north side of a plantation, bordering on a cemetery, a field and the grounds of local authority housing form the northern boundary.

Stables and Coach House  Not listed

The former stables and coach house of the early 19th century stand east of the house site. Brick, two storey with hipped slate roof.  The centre, which has been raised, is of three storeys with hipped roof.

The pleasure gardens no longer exist although some of the Victorian planting in the former shrubbery area and the fish pond remain.

Most of the brick walls of the former kitchen gardens have been retained and the area is used for pheasant rearing.  The keeper lives in the gardener’s cottage.

A rectangular area of parkland dotted with clumps and single trees surrounded by a broad plantations. The parkland is divided into three fields.