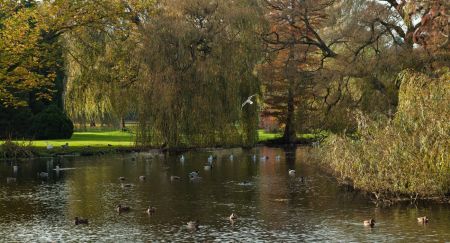 Rare survival of a large 19th-century villa garden in a built-up area.

In 1801 John William Hentig (born at Saltzgitter, Germany in 1760), a Hull merchant and shipowner, purchased a cottage or house and land at the east end of Cottingham in an area known as the Thwaite (an old name meaning ‘clearing in a wood’). (ERALS, Deeds Registry, CC/286/434) Soon after he built Thwaite House and laid out the grounds. He died in 1853, and in 1855 his widow Catherine sold the estate to Thomas Wilson, another Hull merchant and shipowner, who lived at Park House (Cottage) in Cottingham. Thwaite House became the home of Wilson’s eldest son, David. (ERALS, Deeds Registry, HF/316/385; HZ/34/48; Census returns.)

In 1872 Charles Henry Wilson, youngest son of Thomas, acquired Thwaite House from his brother, and soon after he enlarged the house and improved the grounds. In 1878 Charles purchased the much grander Warter Priory estate and two years later sold the Thwaite House estate to Dr Albert Kaye Rollit, a Hull solicitor. (ERALS, Deeds Registry, KX/410/545; NE/115/184). Rollit held many public offices, including Lord Mayor of Hull and Sheriff of Hull, and in 1886 was elected as Conservative MP for South Islington. In 1897 he sold the Cottingham estate to Colonel William Edward Goddard, a Hull stationer. (ERALS, Deeds Registry, 92/269/241)

In 1928 Goddard’s widow Aletha moved to a neighbouring house, Southfield (later Southlands), and the Thwaite House estate was sold to the newly-established University College, Hull (now the University of Hull), the present owner. The house was converted to a hall of residence for women students (Thwaite Hall), to which additional large accommodation blocks were later added. (ERALS, Deeds Registry, 368/36/31; Allison (ed.), VCH Yorks ER IV, 65) In 1948 the University established the Botanic Gardens and Experimental Ground within the gardens.

The site was landscaped in the first decade of the 19th century as a setting for Thwaite Hall, built for John William Hentig c. 1803. The Cottingham tithe award plan of 1839 suggests that by this date there was a formal garden area north of the house, including an enclosure planted with trees, presumably the orchard. (Raine, An Historic Garden?, front cover.) The extensive, roughly rectangular area to the north was laid out as parkland, with plantations along the eastern, northern and western edges, and along the western half of the southern edge. This area was divided almost in two by an elongated ‘fishpond’ (fed by natural springs from an area to the west known as ‘The Bogs’) with a central arm extending south to meet the southern boundary at the point where the boundary plantations terminate. A further plantation is shown running along the northern bank of much of the western section of the fishpond; it then continues in a north-westerly direction to join the plantations around the site boundary, apparently following the line of a stream that fed the pond (not shown on the tithe award plan).  This effectively meant that the parkland was divided into three distinct sections. Parts of this area were used as grass paddocks. The same layout is shown on the Ordnance Survey plan of 1855.

When the Thwaite House estate was put up for sale in 1854, following Hentig’s death, the following description of the house and grounds was given in the Hull Packet, 9 June 1854:

To be sold ... a substantial and well-built mansion ... approached from the Thwaite or Hull road by a handsome carriage drive, with a detached double coach-house and stables for five horses, an excellent garden behind, containing an acre of land, enclosed by a wall 11 ft high, covered with fruit trees in full bearing, an extensive and productive vinery, Pleasure Grounds tastefully disposed and planted with choice shrubs and stately trees, with serpentine walks and fish ponds, also four closes of rich grass land, lying within a ring fence, and belted by thriving plantations.

An adjoining plot of land was used as a kitchen garden.

The Thwaite House estate was purchased by the Wilson family in 1855. From 1872 it was the home of Charles Henry Wilson, the Hull shipping magnate. Although he lived there for only a few years he extended the house, and made improvements to the grounds. He transformed the long, narrow stretch of water into the present lake, introducing the wide areas of water at either end to give a more natural effect. Two islands were created, a large one at the west end, and a smaller one towards the east. Charles Wilson is also said to have laid out the gardens and planted many trees and shrubs, including rhododendrons and lilacs to the north side of the lake. Some of the older specimen trees south of the lake, such as the Wellingtonia, must have been planted at this time. (Raine, Brief History of Thwaite House, 17-18)

The Ordnance Survey plan published 1892 shows a series of serpentine paths leading from the house to and around the lake. Features include a fountain, close to the house, and a boat house on the lake. Charles Wilson, later Lord Nunburnholme, moved from Cottingham following his purchase of the vast Warter Priory estate in 1878. The magnificent gardens he laid out there have been destroyed.

The grounds of Thwaite House were well maintained by the next owner, Dr (later Sir) Albert Rollit, a Hull solicitor. The following description was given in the Hull Packet, 14 September 1883, in connection with a visit there by members of the Kingston Model Yacht Club:

As might be expected from the President of the [Hull] Botanic Gardens, the grounds are in admirable order, and the parterres, choicely set out, as well as luxuriant in growth and colouring, have yet suffered nothing appreciably from the advancing season. The extensive lake – made picturesque by the taller and statelier variety of trees at the upper extremity – was found admirably suited to the purpose of sailing.

Colonel Edward Goddard purchased the Thwaite House estate in 1897. In 1900 Edwin Wright was appointed as head gardener. Goddard also employed 5 labouring gardeners. (Raine, Brief History of Thwaite House, 25; 1901 Census). The 1910 Ordnance Survey plan shows no change to the basic layout of the grounds, although the enclosure to the north-east of the house is drawn without divisions or trees. This is probably an omission, for a plan drawn from memory by the head gardener’s son in 1984 showing the layout of the grounds before the First World War indicates this was the still the location of the orchard, which he described as being divided into sections by box borders, with a high brick wall along one side, on which espalier fruit trees were grown. Other features between the house and the lake included a lawned area with scented roses, and a summer house with croquet lawn. At this date the paddocks around the lake were still used for haymaking. (Raine, Brief History of Thwaite House, 19; 25-9)

The acquisition of the estate by the University of Hull in 1928 had an impact on the garden areas close to the house. Additional accommodation blocks were built on the orchard, and the greenhouses north-west of the house were taken down. In 1948 the University established the Botanic Garden and Experimental Ground within the gardens. New planting included conifers, apple and old rose species.

More recently work such as the creation of a herb garden has been carried out by the Friends of Thwaite Gardens, established c. 2000 after plans to build on part of the site were overturned, and the gardens listed.

Cottingham ‘village’, which now has a population in excess of 17,000, is located in the Hull Valley, approximately 4 miles north-west of Hull and 35 miles south-east of York. Thwaite Hall Gardens lie at the eastern edge of the village, within a mile of the modern boundary of the city of Hull.

In 1823 it was said that ‘twenty years ago Cottingham was a favourite place of residence for the more opulent portion of the merchants of Hull, and it still boasts many handsome country houses, gardens and pleasure gardens.’ (Baines, History of Yorks II, 190.) Although several of these villas survive, only Thwaite House (Hall) has retained its extensive grounds.

The Thwaite House estate was said to cover approximately 31 acres (over 12 ha) in the 19th century. Some changes have been made since its acquisition by the University of Hull in 1928 including the incorporation of the gardens of an adjoining property, Southfield (later Southlands) into the grounds.

The ‘handsome carriage drive’, providing access to Thwaite House from Thwaite Street, was mentioned in 1854. (Hull Packet, 9 June 1854). This remained as the entrance until the University closed it to vehicles which now access the site via New Village Road.

Thwaite House was built for John William Hentig, c. 1803. A modest regency brick villa, it was altered and enlarged c. 1873-4 by Charles Wilson. (Allison, Cottingham Houses, 71). Extensive student accommodation blocks built by the University are attached to the north-west corner of the house.

In the 1860s David Wilson built or rebuilt a house on New Village Road, on the eastern boundary of the gardens, facing Endyke Lane, for his head gardener. (RDB, KX/410/545) A plain two-storey brick house, it is now in private ownership.

The layout of the main section of the garden, the area surrounding the lake, is still recognizable as that shown on the Ordnance Survey plan of 1890. This reflects the improvements carried out in the 1870s to the basic layout established in the early 19th-century. Some tree planting within the paddock areas took place in the second half of the 20th century. Tennis courts were built on the south-west paddock c. 1950, and a rockery was constructed near the lake  (English Heritage, Register of Historic Parks and Gardens, entry no. 1000137)

The character of the southern section of the grounds of Thwaite House (Hall) was altered when the University built accommodation blocks (1938 and 1948-50) attached to and north-east of the house, covering the site of the orchard. (Pevsner & Neave, Yorkshire: York & ER, 390). The  greenhouses north-west of the house have also been lost. At the beginning of the 20th century these were used to grow an extensive range of plants including palms, ferns, cyclamens, carnations, grapes and nectarines. (Raine, Brief History of Thwaite House, 19)

The area between the University accommodation block and the lake retains many specimen trees. Some of these date from the Victorian period; others have been planted by the University.

When the estate was put up for sale in 1854 the kitchen garden advertised as a separate lot, ideally suited for building on, was described as ‘A plot of superior garden ground ... containing by recent admeasurement, 1 rood & 33 perches, used as a kitchen garden, fronting the Hull road’. (Hull Packet, 9 June 1854).

In 1865 Mr William Nassau, gardener to David Wilson esquire of Thwaite House, Cottingham, wrote a testimonial in the local newspaper recommending a particular variey of pea, the Lincolnshire gem, stocked by Martin & Son of Cottingham. Described by Nassau as the’ best dwarf pea I know of … growing very prolific, and of exquisite flavour’, this must have been one a great range of vegetables grown in the kitchen garden. (Hull Packet, 30 June 1865)

An account of the gardens at the beginning of the 20th century refers to the kitchen garden being some distance from the house, occupying a long, narrow plot fronting Thwaite Street, later the site of the University’s Botanic Gardens. Yellow varieties of strawberries and raspberries were among the soft fruits grown there. (Raine, Brief History of Thwaite House, 28)

E. Baines, History, Directory and Gazetteer of the County of York, II, 1823