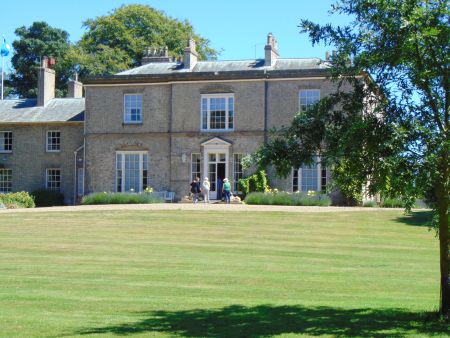 The owners chiefly responsible for the landscaping were:

The Constables built a manor house at Wassand in the early 17th century. A small park was created south of the manor house by enclosing former open-field land. (Kent, VCH Yorks ER VII, 367-8) The extent of this early park can be seen on a plan of 1809, a few years before Wassand Hall was built and the old manor house pulled down (see plan, below). Popham suggests that a certain amount of planting must have taken placed by c. 1700. (Popham, ‘Wassand Estate’, v. 3, 18).

There are records of tree planting at Wassand in the early to mid 18th century, but the major landscaping took place in the early 19th century when the new house was built. The park was extended and Hornsea Mere became a key feature in the designed landscape.

Marmaduke Constable 7th, who inherited the Wassand estate in 1731, kept notebooks of the work he carried out. This included much tree planting. In 1737, for example, he planted 540 Scotch firs, 70 Spruce firs, 300 elms and 12 larch trees at Wassand. Other species planted over the next decade included sycamore, beech, Spanish chestnut and holly.  (‘Popham, Wassand Estate’ v. 3, 11). The hardwood species were used to plant small copses and woodland belts. The larches were probably for ornamental use, but the fir trees would have been a nursery crop. (Popham, ‘Wassand Estate’, v. 3, 12) Payments were made to two nurserymen: William Sigston, whose family had a business in Beverley, and Mr Wight, almost certainly Nicholas Wight who ran a tree nursery at Scorborough where he had been gardener to Charles Hotham.  (Popham, ‘Wassand Estate’ v. 3, 10)

Charles Constable inherited Wassand in 1812, and over the next three decades made many improvements. In 1815 a new house, Wassand Hall, was completed. It stood south-west of the old house, on a slight eminence, giving a distant view of the mere to the east. The park was extended, taking in land west of the new house, more than doubling it in size, and a new access drive created through the park. Many new areas of woodland were planted on the estate. John Popham has noted that Constable’s ‘extension to the park, with its gently curving entrance drive, and disposition and size of the clumps in the new park, the use of multi-planted beech (… two or several trees planted together in the same pit to produce large fused trees – fashionable at that period), and his tea house on the lake all reflect the style of the period. One might loosely call it a Reptonian influence’. (Popham ‘Wassand Estate’ v. 3, 30)

The following chronological list of plantations has been compiled from Charles Constable’s notebook by Popham  (Popham, ‘Wassand Estate’ v. 3, 26-7) Popham notes that Constable makes not reference to the ‘park’ as we now describe it, but continues to describe the parkland areas by their old names of High Orchard, the Ing Close and Cow Closes. Fuller extracts from the notebooks are given in Appendix 2 of Popham’s report.

1816   Planted Round clump opposite west front of hall

1818   Planted trees in the Lawn and the Ing close

Planted east part of bottom opposite Keeper’s Cottage with willows

Plantation in front of garden on SW of the Walk

Planted shrubs and underwood by the old house

Clump directly West of my House

Clump where the Ing close were made

also clumps near garden do. in Seeds close

Clump at the North Part of Ing Close

Planted the clump south of the drawing room windows

Planted the ? where bricks are made

Planted Banks in Holland (near east lodge?) with Oak

Planted the piece between Wood Yard and Brick Yard

Chronological list of plantations made by Charles Constable at Wassand over two decades from 1813  (Popham, ‘Wassand Estate’ v. 3, 26)

The mid-19th century OS plan shows the improvements carried out by Charles Constable who died in 1852. By 1880 the mere edges of willow on the road to Hornsea had been planted up with mixed plantations. From then onwards the family kept the west end of the mere for private use, preserving it as a wildlife sanctuary. (Popham, ‘Wassand Estate’ v. 3, 32-3)

Wassand lies south of the B1244, less than 3 miles west of the coastal town of Hornsea, and approximately 11 miles east of Beverley.

137 acres (55.5 ha) not including Low Wood and the other plantations at the west end of Hornsea Mere.

The Croftings Drain and Low Wood Drain form the boundary to the north, and on the west a lane named Grundill Lane on 19th-century Ordnance Survey plans. To the north-east the parkland extends to the west side of Low Wood and Hornsea Mere, and on the east and south to boundary plantations including Fox Cover.

The grounds of Wassand Hall are low lying with drains to the north and west and the extensive Hornsea Mere on the east. The land is slightly undulating from between 5 m to 15 m AOD, rising north-east to south-west. The bedrock is chalk (Rowe Chalk Formation); the superficial deposits are alluvium in the northern part of the park and boulder clay (Devensian Till) in the southern part.

The grounds of Wassand Hall are in a superb setting overlooking Hornsea Mere. Except immediately to the north-est where there is an area of permanent pasture, the well-wooded parkland and associated plantations are set in a wider landscape of open arable fields to the north, south and west.  Wassand is in East Riding Landscape Character Type 18: Low Lying Drained Farmland (Holderness).

The 1809 map shows a road leading west from the old house at Wassand towards Sigglesthorne. When the new house was built and this area to the west was taken into the parkland a new, curving carriage drive was built north of the old road. In 1815 an attractive Gothic-style lodge (West Lodge, listed Grade II) was built at the north-east corner of the junction of this drive and Grundill Lane. (Pevsner & Neave, Yorkshire: York & ER, 674). Single-storey, with a timber veranda; tiled roof with overhanging eaves with decorative bargeboards. The pointed windows have intersecting glazing bars.

In 1830 a ‘new cottage on the Hornsea Road’ was built by Charles Constable in  ‘in order to have my letter bag left there’ (Popham ‘Wassand Estate’ v. 3, Appx 2, p. 10). This may be a reference to East Lodge, listed Grade II (formerly called Hornsea Lodge), on the west side of the road that provides access to Wassand Hall from the Seaton-Hornsea Road, a little south of the junction, although it is said to have a datestone of 1846 inside (inf. given by tenants to Paul Glazzard, geograph.org.uk). It is single-storey, whitewashed, with a decorative fish-scale slate roof. The pointed windows with hoodmoulds have Gothick glazing bars. The road on which the lodge stands became the principal entrance to Wassand Hall.

Although not strictly part of the parkland landscape, the picturesque round cottage (Mushroom Cottage, listed Grade II) on the north side of the Seaton-Hornsea road, opposite the mere, is the first building Charles Constable records having built on inheriting the estate in 1812 made when he inherited the estate. (Popham ‘Wassand Estate’ v. 3, 21)

The present hall, a two-storey five bay brick villa, was built for Charles Constable 1813-15, to the designs of Thomas Cundy. The house was altered by the Bridlington architect Francis Johnson 1947-8, who demolished the service wings and other unsightly Victorian additions, and remodelled the north front. (Pevsner & Neave, Yorkshire: York & ER, 674)

The stable block with coach houses stands to the north of the hall, and was built at the same time, presumably to the designs of Thomas Cundy. White brick with ashlar dressings, with shallow pitched hipped roofs with overhanging eaves. The east wing has a square cupola with clock.

The brick and pantile loggia north-east of the hall was designed by Francis Johnson who was employed by Sir Marmaduke Constable after the Second World War to carry out work at the hall. (Popham, ‘Wassand Estate’ v. 3, 33)

There is no record of pleasure gardens associated with Wassand Hall, where the preference was for a parkland setting with vistas towards the mere. In the late 1950s the ‘simplicity and informality of the immediate surroundings of the house which consists of lawns and great trees’ was noted. There were ‘few flowers near the house, the only concession in this respect being in front of the south elevation where a small number of large rose beds have been arranged in a symmetrical pattern upon the lawn’.  (‘Wassand Hall’, 42-3)

Since the Russells moved to Wassand in the 1990s the walled gardens have been restored. One section is used as a kitchen garden with vegetables and fruit trees; the other features pleached lime trees enclosing a central lawn with fountain, and has rose beds, borders, herbs etc.

The area of open parkland surrounding Wassand Hall shown on the 19th century OS plans survives. Within this area the boundaries of the smaller park associated with the earlier house are definied by woodland belts. The perambulation through these woodland belts, is thought to date from c. 1820 (Popham, ‘Wassand Estate’ v. 3, 29).

The plantations remain more or less as shown on the OS plan of 1910 although Dutch Elm disease destroyed many trees on the estate in the later 20th century. A detailed tree survey carried out by Historic Landscape Management in 1997-8 is given as Appendix 4 in Popham  ‘Wassand Estate’ v. 3.

The mere lies north-east of Wassand Hall, and extends to the town of Hornsea. Some 2 miles in length and up to .75 mile in width, it is the largest freshwater lake in Yorkshire. It was acquired by Constable family in the 16th century. (Popham, ‘Wassand Estate’ v. 3, 6) Woodland planting is shown around the northern edge of the mere on the 1809 plan. When the park was extended in the early 19th century, after Charles Constable inherited the estate in 1812, the mere became an integral part of the landscape, which much additional planting around the perimeter carried out by the estate.

A picturesque ‘cottage ornee’ was built on Lady Island, close to the northern bank of the mere, probably c. 1820 (the date is commonly given as 1818 but this reference apparently refers to the building of an ice house elsewhere on the estate, rather than a ‘tea’ house on the island). The building has long gone, but the foundations can still be traced. (Popham ‘Wassand Estate’ v. 3, 28) This island is now attached to the bank. There is a larger island, Swan Island, at the eastern end of the mere.

For many years the peninsular at the eastern end of the mere, accessed from Hornsea, has been a tourist attraction with boating facilities and a café.

The serpentine pond west of the road leading from Wassand Hall to the Seaton-Hornsea road is shown on the 1809 plan. Popham suggests the pond was formed from a remnant of an ancient drainage system (Popham ‘Wassand Estate’ v. 3, 19)

This report draws heavily on volume 3 of the detailed landscape management plan drawn up by John Popham for the trustees of Wassand estate following the death of Lady Strickland-Constable in 1995. (J. Popham, ‘Wassand Estate’, v. 3), a copy of which has been deposited with the East Riding Archives  [ERA] at the Treasure House in Beverley. Popham made extensive use of documentary material discovered at Wassand Hall in 1998 which was deposited with East Riding Archives and which has been catalogued more fully in recent years.