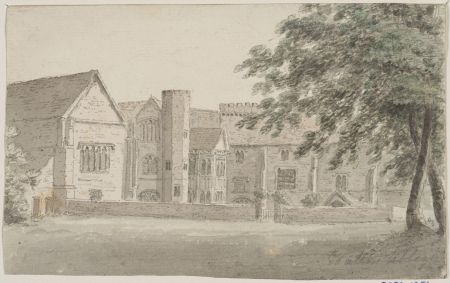 The house known as Watton Abbey is the remnant of an important Gilbertine priory. After the Reformation it became a private house and the grounds, including the site of other monastic buildings, were laid out as gardens, adding another layer of history to the landscape. A formal avenue linking the Beverley-Driffield Road to the gardens was planted in the 19th century.

Watton Priory surrendered to Crown in 1539. By the mid 17th century ownership of the site had passed to Heneage Finch, 2nd Earl of Winchilsea [sic], and in 1672 it was sold to William Dickinson of London. Dickinson’s daughter Sarah married Hugh Bethell of Rise, and the estate passed to the Bethell family, who still own it.

Watton Priory, founded c. 1150, was the largest house of the Gilbertine order in England, and accommodated both nuns and canons, in totally separate quarters. The priory surrendered to the Crown at the Dissolution in 1539, and the building known as the Prior’s Lodging became a private house. (Pevsner & Neave, York and the ER, 735-6)

By the mid 17th century the priory site was in the hands of Heneage Finch, 2nd Earl of Winchilsea. He was heavily in debt, and in 1660 the Watton estate was placed in the hands of trustees to facilitate the settlement of these debts. (ERALS, DDRI/33/1).

Although he had no real control of the estate at this time, Winchilsea made extensive plans for its improvement, writing a series of letters from Constantinople where he was representative of the Levant or Turkey company, and effectively English Ambassador. A letter written in 1666 refers to plans included establishing a tree nursery near the house, with different sorts of soil and temperature, for which two pieces of ground would be required:

My orchard next the abbey within the wall (and if ever I should live there I shall grubbe up) and part of the kitchen garden, and of the other orchards, but you choose

A gardener, whose ‘wages and diet’ should not exceed £30 p.a., would be appointed:

For my gardens and orchards, I desire that there be no charge increased to mend the walks only… trees [that] are good to be preserved and good ones planted in the places of such as are decayed or bad. And if my kitchen garden be preserved in such a condition as may afford me a sallet [salad] some potte herbes and rootes etc when I shall return, and if the profit that doth arise from my orchards or gardens in my absences, if there by any thing considerable be applied towards my gardener’s wages.  (Leics. Co. Record Office, DG7 box 4984)

These schemes did not come to fruition, and in 1672 the estate was sold to William Dickinson of the Customs House, London, the earl’s principal creditor and London agent. He died at ‘Watton Abbey’ in 1702. The estate passed to the Bethell family through the marriage of Dickinson’s daughter, Sarah, to Hugh Bethell of Rise (Neave, ‘Rural Settlement Contraction’, 388-9). She died in 1730 and was buried at Watton (Monument in St Mary’s church, Watton)

The Bethells seem to have spent part of their time at Watton in the 18th century. It was still home to ‘Mrs Bethell’ in 1808, probably Charlotte widow of William Bethell. She died in 1814. Richard Bethell, who inherited the Rise and Watton estates on her death, began rebuilding Rise Hall in 1815 and the house at Watton was thereafter let to tenants.

The first plan of Watton to show the site in any detail is dated 1707 (although this is said to have been drawn up from an earlier survey). This shows the former prior’s lodging (then a private residence known as Watton Abbey), and another large building further north (the now-derelict ‘barn’, almost certainly used as stables at that date). A stream ran north from Watton beck, under the house (as it still does) and under and beyond the stables, then west and finally south back to the beck, enclosing the western part of the monastic site and forming the northern and western boundaries of the curtilage of the grounds associated with Watton Abbey. This stream or drain was a feature of the medieval monastic site.

In  1707 the areas east of the former prior’s lodging are marked as ‘orchards’ (those referred to by the earl of Winchilsea in 1666). ‘Gardens’ extend from the beck to the south to the stables to the north, the western boundary dividing them from the churchyard and the area known as ‘Nuns’. The latter is shown planted with trees. A bridge across the stream, about 10 metres north of the house, is said to bear the date 1723, which may indicate that work on the gardens was taking place at that time. (Listed building description)

The next map is dated 1761, and shows a similar layout but with certain improvements.  East of the house the orchards are still marked: Little Orchard to the north and Great Orchard to the south, together amounting to just over 4 acres with the 2½ acre ‘Garding’ in the middle, adjoining the house. The surviving south wall of this garden, built from reused monastic stone and with an earth wall thrown up against it, is reputed to be associated with the Civil War period, when Watton Abbey is said to have been fortified by Royalist troops. (Listed building description)

Incorporated into the wall at the south-east corner of the garden is a circular mound known as Butt Hill (a smaller mound, also known as Butt Hill, stands further north). Traditionally this mound is said to have been an archery butt, hence the name, but by this date it was a garden feature. West of the house are the ‘Courts’ (described as gardens in 1707) of just over 4 acres, with a belt of trees planted along the western boundary. The 7½ acre area called Nuns to the west, still encircled by water, has trees planted around the southern, western and part of the northern boundary, and is now cut across by an avenue of trees leading to the house. This links with a new road cutting across Calfhouse Garth, giving a grander approach to the house from the village.

In the 1820s Watton Abbey was home to Digby Legard and later his son George. In 1829 it was said that:

The abbey gardens are well laid out, and scientifically managed. Many parts of them display great floral taste, which must be attributed to the judicious superintendence of the young ladies who reside there; and the tout ensemble reminds us of one of those romantic fairy palaces with which our youthful fancy has been much amused (Oliver, Beverley, 532)

In 1830 Revd John Earle established a boarding school at Watton Abbey, relocated from Driffield, which lasted a decade. (Hull Packet, 23 Feb. 1830; 26 June 1840) Earle also served as incumbent at Watton. His place was taken by Revd Henry Jennings who also lived at the ‘Abbey’.  The Jennings family maintained the gardens (in 1854 Miss Jennings of Watton Abbey was an exhibitor at the Bridlington Floral and Horticultural Society’: Hull Packet, 28 July 1854), which in 1856 were described as ‘beautifully laid out’. (Sheahan  & Whellan, History of York & ER II, 518)

The estate was mapped again in 1859. The main difference between the layout shown in 1761 and 1859 seems to be the loss of the ‘Little Orchard’, which together with the northern section of the ‘Courts’, had been merged with the area with the avenue (‘Nuns’), perhaps to give a more ‘parkland’ feel to the grounds. A new plantation, perhaps a shrubbery, is shown south-west of the house, bordering the stream.

From c. 1860 Watton Abbey was let to Richard Beckitt, a prosperous tenant farmer, Henry Jennings and his family having moved to the newly-built vicarage on the opposite side of the Driffield road. In 1861 Beckitt’s household included a pupil farmer, William Perfect from Pontefract, who must have been a member of the well-known family of nurserymen.

During Beckitt’s tenancy, which last until his death in 1898, the track that ran from the old Driffield road across Calfhouse Garth was planted up as a long avenue, to meet the remnants of the short avenue that was laid out in the first half of the 18th century. Between 1893 and 1898 the monastic site was excavated by William St John Hope.

Later tenants included John Arthur Coulson who was there throughout and beyond the Edwardian period. A photograph of the abbey around that time shows roses planted in beds in front of the house. (Hull Daily Mail Flashback Issue 45, 26 April 1997)  The 1910 OS plan shows the kitchen garden, with greenhouses, east of the house, the same area that was marked as ‘Garding’ in the mid 18th century. In 1935, when the Pexton family were the tenants, an article about the house and monastic site appeared in Country Life (2 November). The photographs used to illustrate that article show various garden features made up using fragments of carved monastic stone, presumably from the 1890s excavations.

Watton Abbey lies 6 miles north of Beverley and 5 miles south of Driffield, on the east side of the A164 (Beverley to Driffield road). The parish church stands close to the former monastic site, but most of the village of Watton lies on the opposite side of the A164.

A low-lying flat area on the western side of the Hull valley. The land lies between 5 m and 10 m AOD and is dissected by drains and streams. The bedrock is chalk (Flamborough Chalk Formation) and the superficial deposits boulder clay (Devension Till).

The immediate setting for the grounds of Watton Abbey is permanent pasture to the north, east and west, typical of this area of early enclosure. The wider landscape is one of larger open arable fields with few trees except to the west and the woodland associated with Kilnwick Hall. The grounds of Watton Abbey are included in East Riding Landscape Character Type 16 Sloping Farmland (Holderness).

The long drive known as the Avenue dates from the second half of the 19th century. Access to Watton Abbey is now via the entrance on Church Lane.

The house known as Watton Abbey is the former prior’s lodging of the Gilbertine priory that was founded here c. 1150. The earliest part of the house, to the left of the main (west) front, is a three-storey range built of stone, with an undercroft. The brick range to the right, also of three storeys, dates from the mid-late 15th century. It has three octagonal corner turrets, and an impressive two-storey stone bay window. A stream runs under the house. The low wall adjoining the house has many architectural fragments from the excavated priory site. (Pevsner & Neave, York & the ER, 736)

To the north of Watton Abbey stands a derelict 11-bay brick outbuilding that dates from the late 15th century or early-mid 16th century.  (Pevsner & Neave, York & the ER, 736-7) It may have been built before the priory was dissolved in 1539, perhaps as a guest house, but was probably used as stables, perhaps with accommodation above, when the prior’s lodging became a private house. The stream runs underneath it.

The layout of the site is more or less as shown on the 1910 OS plan although a field boundary now cuts across the north-east corner (see 1910 & 2012 plans above). The kitchen garden no longer exists. The 19th-century avenue leading from the Beverley-Driffield Road to the gardens remains a prominent feature in the landscape.

There are remnants of monastic fishponds in a field to the north-east of the site, but this area was not incorporated into the grounds when the remnant of the priory buildings became a private house.