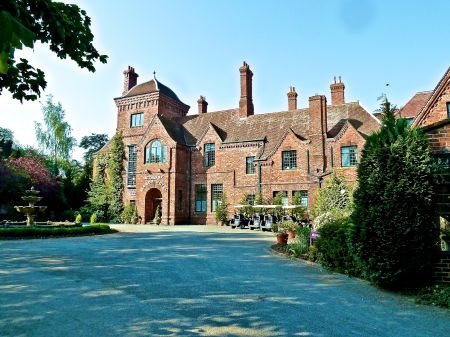 A small mid-19th century park and garden laid out following the construction of the main building, Aldwark Manor, together with a kitchen garden and two lodges. The original parkland is mostly intact, having been converted to a golf course and lies within a Conservation Area.

By the late 16th century, the manor of Aldwark was owned by the Frankland family (Gill 1852, 397) and it continued in their ownership until the 20th century (later members would also own Thirkleby Hall). A moated manor house was erected to the north of the later parkland but had been demolished by the time of the first Ordnance Survey map, surveyed between 1848 and 1852. However parts of the moat had survived, together with the ‘Bowling green’ to the south west of the site into the mid-19th century. The land was tenanted and farmed by a Thomas Eshelby, whose house stood next to the former manor house site (Gill 1852, 397). The wider Aldwark estate contained areas of woodland, most notably Aldwark Wood and Old Fox Cover about a mile to the south of the village and Moor Plantation to the east. It was used as a sporting estate with the Gamekeeper’s Lodge to the north east of the village.

About 1863 (Yorkshire Post and Leeds Intelligencer, 4 October 1873), the present Aldwark Manor was built (HEA OP12331, OP12332) on the former Pasture Hill (NYCRO M/2) by the then owner, Lady Frankland-Russell. By the 2nd OS map, surveyed 1891/2, the parkland had been laid out and a kitchen garden had been erected together with two lodges. The property was been tenanted almost from the time it was completed (Leeds Times, 7 September 1867) until it was finally sold by the Frankland family. In 1874 Major Archibald Hamilton Cochrane became the tenant (York Herald, 12 October). When the estate was put up for sale in 1911 (HEA SCO1275), the tenant was B. Hutton Croft but it appears that the sale did not go through. It was then let to the Gunter family, who were in residence by 1914.

During the Second World War, it was requisitioned for use by Canadian forces. In 1947, it was once again put up for sale and bought two years later for £10,400 by the Education Committee of the City and Council of Kingston upon Hull, to be used as a school (Hull Daily Mail, 27 April 1949). The school was opened in 1954 (Yorkshire Post and Leeds Intelligencer, 18 May). It is now a hotel and a large section of the parkland has been converted to a golf course.

Aldwark Manor lies in the parish of Alne, about 11½ miles (20km) north-west of York and next to the River Ure. The village of Aldwark, together with the Manor and the majority of its parkland lie within a Conservation Area.  Aldwark Manor and its parkland lie on a raised elevation to the river, with the main house at 19m AOD. The historic parkland covered about 37 acres with its northern boundary next to the village, its western adjacent to the road as far as SE 469 627. Its southern boundary continued north-east to SE 427 630 and the eastern boundary to SE 471 632 (Figure 1).

In addition to the surviving main house, there are also two extant entrance buildings: North Lodge and South Lodge with their associated carriageways. In the sale document of 1911 (HEA SCO1275), the estate has 120 acres of woods and plantation and described as being ‘conveniently situated for Sporting and are stocked with a quantity of valuable Oaks and other Forest Trees’.  Aldwark Wood and Moor Plantation are 71.5 acres and 8 acres respectively.

The house and pleasure grounds cover just over 4 acres and the sale catalogue (HEA SCO1275) gives the following description of them:

The Gardens and Grounds are inexpensive to maintain. They are well-planned and include a Terrace, laid out as Rose Garden; Tennis Lawn, and to the S.E. of the Residence is a sloping lawn studded with Yew and other Evergreen Trees and Shrubs. There is a span Greenhouse heated with hot water pipes.

The Greenhouse was located 100 ft (31m) north west of the Manor. It was demolished after 1952 when the school was opened and it is now built over.

The kitchen garden area covered 1.35 acres (c. 0.5 hectare) on the 1893 25” OS map with the main walled area having five walls (two set at an angle on the eastern side). On the 1893 map (Figure 2), three glasshouses are shown by the northern wall of the kitchen garden. The sale catalogue (HEA SCO1275) describes these as ‘a Lean-to Vinery, Span Forcing House and Lean-to Peach House, heated with hot water pipes’. These were in place in 1891, when the then tenant advertised for a gardener who ‘must understand management of Vines’ (York Herald, 7 March). There are gravelled walks, fruit trees and a pump (well?) in the centre. These features were still in place by the 1976 OS map, although more recent satellite images (from 2009) show the interior is empty.