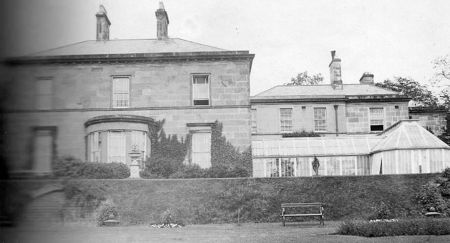 Cleveland Lodge park and garden is a well preserved example of a mid to late Victorian country villa and its associated designed landscape. Thomas Richardson, its creator, was an archetypal self-made man, whose wealth derived from investments in the leading technologies of the day such as the Stockton to Darlington railway. In keeping with his Quaker beliefs, this was a modest house and garden but it has all the elements of the landscaping associated with larger estates such as parkland, tree shelter belts and a water feature.

The Cleveland Lodge estate was built in the village of Great Ayton by Thomas Richardson on a site that had previously been fields of meadow, arable and pasture land (NA IR 30/42/25). In 1847, the owners of these fields were Robert Pybus and the newly established Agricultural School (NA IR 30/42/25). The latter had acquired the estate of Philip Heselton, comprising a house and 75 acres, in 1841 for £6500 following a donation by Thomas Richardson of £5000 (Walker Ord 1846, 416). Between 1848 and 1850 (date on the southern Lodge), Richardson acquired this land, started to build the house and lay out the grounds.

By the 1851 census, Richardson was recorded living there as well as his gardener, William Mudd. He had previously been working at South End, Darlington, the house of Richardson’s cousin, Joseph Pease. He was therefore likely to be responsible for laying out the initial park and garden as seen on the 1st edition 6” OS map, surveyed in 1853 (Figure 1). In 1864, William Mudd left to take up the prestigious post of Curator at Cambridge Botanic Garden. By 1853, there was a small area of parkland of about 15 acres to the south and west of the house, with shrubberies surrounding it. To the east was the kitchen garden area. At the extreme south west of the estate there was a lodge and a carriageway led from it to the western side of the house (Figure 1).

Thomas Richardson died on the 24 April 1853 and in his will written on 24 February 1844 (with a codicil of 17 August 1847) there is no specific mention of Cleveland Lodge (NA PROB 11/2186/422). The bulk of his real estate was inherited by the sons of his first cousin Edward: John, Joseph and Henry Pease. John Pease presumably gained ownership of the Great Ayton estate as he was recorded living there in the 1861 census and the property was mentioned in his will (DCA D/XD 108/2/13). In 1860, he engaged the architect, Alfred Waterhouse, to make alterations to the house (Northern Echo, 21 October 2009 from Waterhouse, P. and Cunningham, C. 1992).

In 1866, Pease acquired further land in Great Ayton, as a codicil to his will dated 9 August of that year (DCA D/XD 108/2/13) stated that ‘land purchased at Great Ayton to be considered part of the Ayton estate and subject to the same uses’. This may have included the fields to the north of the original estate, belonging to Elizabeth Martin (NA IR 30/42/25) that are shown as parkland in the later edition of the Ordnance Surveys 6” map, surveyed in 1892 (Figure 2). Following John Pease’s death on the 29 July 1868, he left Cleveland Lodge in trust for his two daughters, Mary Anna and Sophia (DCA D/XD 108/2/13).

Mary Anna Pease married Jonathan Backhouse Hodgkin in 1873 and he was listed as the owner of Cleveland Lodge in several trade directories (1893 Kelly’s Directory of North and East Ridings and Bulmer’s Directory of 1890). However the couple are recorded as living in Darlington in the 1881 and 1891 censuses and so may have divided their time between the two properties. Work though continued on the park and garden and a full-time gardener, William Short, was employed until his death in 1887. Between 1883 and 1886, Hodgkin once again employed Alfred Waterhouse to make alterations to the house at a cost of £790 (Northern Echo, 21 October 2009 from Waterhouse, P. and Cunningham, C. 1992).

The 2nd edition 6” Ordnance Survey map surveyed 1892/3 showed that a second lodge had been added to the north, just off Newton Road with a carriageway running due east through perimeter planting to the house. The parkland had been extended by this time to the north with a new belt of trees and to the south east, where there was a new pond and perimeter planting (Figure 3). The total area of parkland was now about 35 acres (14 hectares). There was a conservatory attached to the main house built before 1862 (GAHS 0aha00ae, Figure 4 and FMA Fry 1901, Figure 5) with additional glasshouses to the east. There was also a fountain on the main lawn (FMA Fry 1901, Figure 6) to the south of the house. This was formerly in Bondgate, Darlington (DCA D/Ho/C 35/1).

In the 1901 census, it is Sophia Fry’s (neé Pease) son, John Pease Fry, who was resident at Cleveland Lodge and he continued to live there until his death on 25 January 1957. JB Hodgkin died on 26 April 1926 and was described as ‘of Elm Ridge’ Darlington and Great Ayton in the probate records, so it appears that he remained the official owner until his death. During the 20th century there was little change to the designed landscape, the exception being the construction of tennis courts due north of the house by 1966.

Cleveland Lodge is in the village of Great Ayton, about 7.5 miles (12km) south east of Middlesbrough. The estate covers about 35 acres with its northern boundary extending from Newton Road at NZ 563110 east to the railway line running north from Great Ayton station. The eastern boundary is the Newton Road to the southern Lodge, with the southern extent of the estate running along the drain to NZ 568109. The ground slopes down from west to east from 110m AOD to 88m with the house at 100m AOD.

The underlying geology of the area is mudstone (Redcar Mudstone Formation) with overlying glacial till deposits of clay, sand and gravel (Vale of York Formation). This gives rise to slowly permeable, seasonally wet and slightly acid but base-rich loamy and clayey soils with impeded drainage. There is a drain to the south of the estate and current land use remains as parkland, with the exception of the south east section that is arable.

There are two entrance lodges, the southern one dating from 1850 with an associated carriage drive and the northern one before 1894, again with carriage drive. Cleveland Lodge is listed Grade II (Historic England list entry number: 1189216) and was built between 1848 and 1851. South of the house is a terraced garden with a lawned area below with the fountain (see above). To the east is the kitchen garden area divided by paths and glasshouses at the northern edge (Figure 7). The main gardens are surrounded by areas of shrubbery and the parkland by a perimeter belt of trees.

Walker Ord, J. 1846. The History and Antiquities of Cleveland. London: Simkin and Marshall.

0aha00ae - Photo of the wedding party of Theodore Fry and Sophia Pease at Cleveland Lodge, 1862

Figure 6 – Lawn, fountain and shrubbery to south of house, undated but before 1901. Source: Frenchay Museum Archives